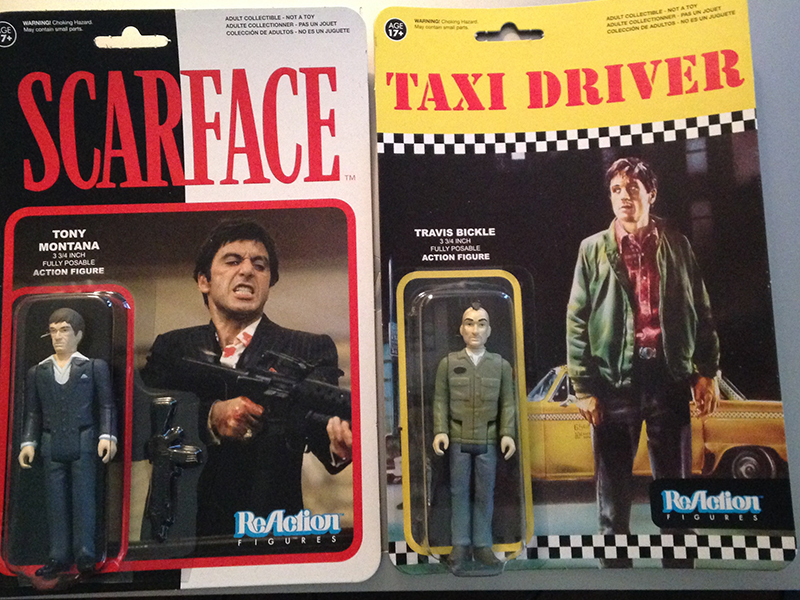 Who among us has not stood in front of their bathroom mirror and performed Travis Bickle’s (Robert DeNiro) “You talkin’ to me?” soliloquy? Who among us has not copied the Tony Montana (Al Pacino) catch phrase, “Say hello to my little friend!” to emphasize the big reveal of whatever our secret weapon du jour might be? Considering the infamy of these two anti-heroes, they’ve become a solid fixture in pop culture, so it was only a matter of time before Funko’s ReAction line got hold of them.

In an age of hyper-realistic action figures that sport 57 different points of articulation, there’s something pure about the ReAction line. Yes, they’re intended for the older toy collector, but not to demonstrate the cutting edge of action figure technology. These figures serve to bridge a primordial gap between a collector’s childhood and adulthood. Using the limited articulation and minimalistic paintjobs of figures produced by Kenner throughout the 1970s and ’80s to recreate two of cinema’s most violent characters, Funko and Super 7 have created a line that appeals to both hemispheres of the adult toy collector’s brain.

The Taxi Drivier figure looks a bit more like Blink 182’s Travis Barker than it does Travis Bickle, but he comes complete with two pistols for some serious dual-wielding action. The blank expression of the figure’s face perfectly mirrors Bickle’s contempt for humanity. Tony Montana from Scarface comes with a surprisingly realistic assault rifle, and does not skimp on the popped collar and exposed chest that Pacino totally owned in the film. There are personalized touches applied to each figure’s face such as Bickle’s mole and Montana’s sliced eyebrow, which are nice little details that fans of the films will appreciate.

No matter where you stand on the open/don’t open controversy, these figures will serve you well. While still in their original packaging, these would make nice wall pieces in a film nerd’s home theater. Each box is designed with colorful pictures and logos from their respective films, so they could easily be used to geek up a room as wall art. For those that like to take the term “action figure” literally, it would be entertaining as hell to engineer a scenario where Bickle and Montana team up with COBRA to wipe out those meddling G.I. Joes.

Even though there’s something gleefully demented about turning two of cinema’s most terrifying characters into three-inch figures with plastic guns, there’s a strange sort of comfort that comes from holding a psychopath in the palm of your hand. I had a decent collection of Todd McFarlane’s Movie Maniacs at one point in my life, and part of the reason I liked having these horrible figures on my shelf was the sense of control that it gave me. The ability to pick up and manipulate a character that was such a towering force of destruction in its respective universe made me remember that, in its action figure form, it was only a heartbeat away from a match and a can of hairspray.

Not only does the ReAction line offer a unique opportunity to see a cherished film character come to life in a new way, but these little figures are multi-taskers in the geek’s arsenal. My suggestion is to pick them up along with the figures from Pulp Fiction and Breaking Bad to create the ultimate tribute to great cinematic crime stories. Or, simply use those figures to create a round robin tournament to see which of your favorite misanthropes would actually win in a fight. They’re toys, after all. Have your own kind of fun with them.