April Fool’s Xanadu: Sirens of Steel vs. Daughters of Anarchy @ The Hive 04.05 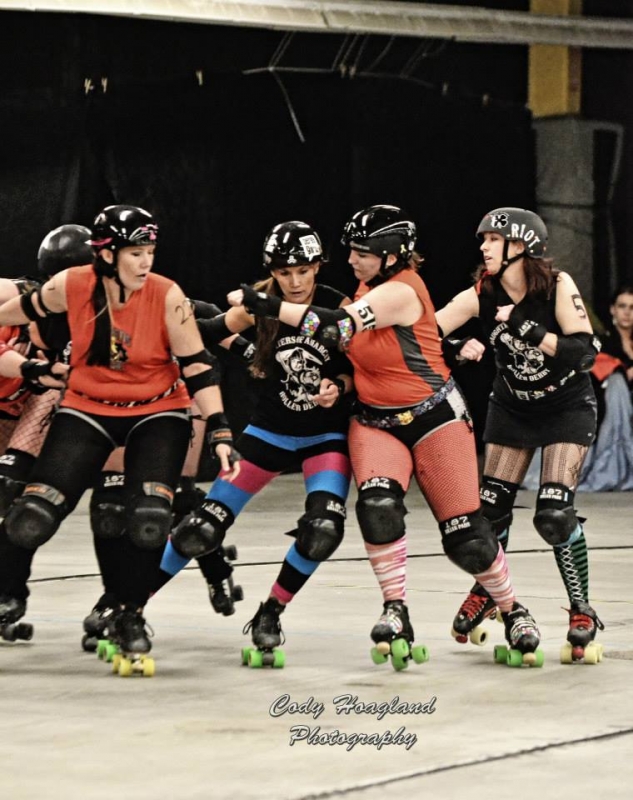 Sirens of Steel vs. Daughters of Anarchy. Photo: Cody Hoagland

Located in Spanish Fork, the Hive is a great location for derby. Kids get in free and the whole place is very spectator-friendly. Scoring a couch seat on the front row, I watched the skaters warm up around the track. The Sirens of Steel were clad in orange and sported an array of intimidating face paint. Dressed in black, the Daughters of Anarchy had a team design on their shirts intentionally similar to the Sons of Anarchy logo. Both teams took advantage of wearing belts—a strategic move that proved helpful later in the bout. The Sirens and the Daughters are actually two of the four teams from Utah County’s all-women flat track roller derby league, the Happy Valley Derby Darlins.

The derby bout started with excitement from the skaters and anticipation from the fans. Advertisements for the bout assured that this was going to “be a close game.” Bratty Cakes from the Daughters of Anarchy broke out in the first jam, scoring 10 points for her team. Despite their point lead in the first few minutes of the game, the Daughters of Anarchy underestimated the Sirens of Steel and their ability to dominate the rest of the game.

Just before the end of the first period, things started getting intense. With the score of 86 to 42, the Sirens started feeling a little comfortable. Not so for the Daughters. Mili Megahurtz from the Sirens had a quick break through the pack, but Pain in the Nikki was right on her tail. Nikki was so determined to get some more points for the Daughters that she was a blur as she raced around the track. The official ruling allows the jammer (in case of emergency or for strategic reasons) to pass the panties to the pivot. This means that the pivot has now transformed into jammer and can score points. So Mili passed the star helmet cover (informally referred to as the “panties”) to Bloody2Shoes, after which the jam quickly ended. In fact, there were probably more star passes during this game than there were skaters wearing fishnets. In the last jam before halftime, Honey Guns gave her jammer Ace of Aches a nice whip right on the apex of the track, sending her speeding through the rest of the skaters.

At halftime, the score was 111 to 63 with the Sirens in the lead. Although it is pretty difficult to make a comeback from a 50-point spread, it is not impossible. As far as the Daughters of Anarchy were concerned, they could still win. After a halftime show consisting of traditional raffle prize drawing and a less-traditional dance performance by the Dragon Celtic Dancers, the game continued.

Unfortunately for the Daughters of Anarchy, the Sirens kept up their pace. Soon, the score was 120 to 63—the Sirens almost doubling the points of their opponents. For a moment, it seemed that the Sirens were in real trouble when their skater, Scarlet Viper, was knocked down. She remained on the ground for several moments while the rest of the skaters took a knee. Fortunately, she was fine after taking a break on the sidelines. The Sirens were still in the lead, but the gap was getting smaller, with the score at 133 to 91. At this point, both teams were using the belts of their teammates to propel themselves and make stronger walls in the pack. With the help of Pain in the Nikki, the Daughters of Anarchy pushed the score to 138. Unfortunately, that wasn’t enough to beat the Sirens. The final score was 215 to 164, with the Sirens of Steel taking the victory.

After the bout, I got a chance to talk with one of the best skaters of the evening, Pain in the Nikki. She’s got a tall, sleek build and a friendly smile. Standing in her black Daughters of Anarchy shirt and pink, blue and black striped tights, Nikki looked tired, but happily agreed to answer a few questions.

SLUG: So how long have you been playing roller derby?
NIKKI: This is my fourth year.

SLUG: What started it all? How did you get into derby?
NIKKI: “Raggedy Slam” was coming to Utah from Oregon and she was starting a team, so I signed up.

SLUG: At that point, had you ever skated before?
NIKKI: Just as a kid, like at Classic Skating and stuff. But nothing big.

SLUG:  So how did you get your nickname, Pain in the Nikki?
NIKKI: My kids picked it out. It fit. My name’s Nicole.

SLUG:  Why do you do roller derby?
NIKKI: I love sports—sports that are competitive, active. And derby fits that.

SLUG: You look pretty athletic, have you played other sports?
NIKKI: Yeah, I played soccer and lacrosse.

SLUG: If you could sum tonight’s match in a sentence, how would you describe it?
NIKKI: I don’t know. Good game!

SLUG:  So what’s your favorite part of derby?
NIKKI: Jamming. I love to jam.

All in all, it was a great bout. Both the Sirens and the Daughters nicely executed an exciting game. The Cinco de Pile, the next event at the Hive, is scheduled for May 3 at 7:00 p.m. You can check out the details and the Derby Darlins on their website at www.happyvalleyderbydarlins.com.