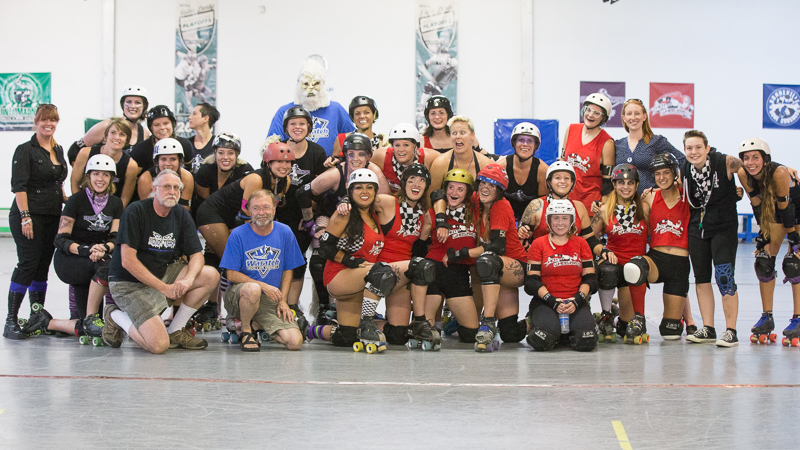 It’s all smiles as the team prepares for the Division 2 semi-final tournament in Detroit. Photo: Mike Lehmann

This Saturday, masses of people packed into the warehouse known as the Derby Depot for the WRD Home Team Championship bout. Nestled in the warehouse district off 700 West in Salt Lake City, the Derby Depot transforms from a warehouse to an arena where skaters fight to the finish. As my friends and I like to say, the women that play for WRD are real competitors. They train together, skate together and bleed together.

It was awesome to see some of the new skaters WRD had acquired over the summer in action, including one of Junction City Roller Dolls’ jammers, Mayhem Miller. Mayhem was able to add speed, technique and ferocity to help the Hot Wheelers’ offense. I also saw several new skaters on the track I had never had the honor of watching before, such as Rainbow Thrash (jammer for Black Diamond Divas) and Ole Chloe (jammer for Hot Wheelers), who kicked ass and took names on the track.

Colorful banners and signs waved, crowds screamed, and a large, white Sasquatch (Sassy, the WRD mascot) could be seen trolling fans for a laugh. Whistles blared and the game began. The Black Diamond Divas started the game in the lead with the help of Sookie Slaphouse, who earned 27 points in a single jam. The Hot Wheelers didn’t go without a fight, though. Triple Lexx continuously blocked the Divas’ jammer, Rainbow Thrash, blocking her into submission, forcing her to pass the star to Sookie Slaphouse. Throughout the first half, Stache Bot 5000, jammer for the Hot Wheelers, knocked down blockers like dominos, whizzing through the pack and scoring points without breaking a sweat. At the end of the first half, the score was 77 HW – 113 BDD. This may seem like a giant lead, but because jammers can score over 40 points in a single jam, the Hot Wheelers still had hope.

The second half intensified, as the Hot Wheelers ramped up their defense to wall the Divas out. Jammers O’Britterator and Stache Bot fought to score points against the Divas’ tight defense, consistently making gains with each jam. It was amazing to see the progression in O’Britterator’s jamming ability, as she laterally moved and juked to get past the blockers. In Jam 13, Stache Bot skated in a power jam, going neck and neck with the hard-hitting defense of Bust-Em Buxom (BDD). Although Stache Bot was hit out of bounds by Bust-Em, she was able to tie the game. The Divas continued to fight, with Animal Kracker having the highest scoring jam of 22 points. Animal gracefully skated backwards, spinning around defenders and barley getting scathed, thanks to her fancy footwork. The Divas came back in the lead for a few jams, until Stache Bot skated onto the track.

Like a bat out of hell, Stache Bot dominated the track, flying around defenders, or knocking them down with sheer gusto. The crowd grew louder and louder with each point Stache Bot scored. In jam 19, the final jam of the game, Stache was hit by blockers, forcing her to skate on one skate around the apex and glide past defenders. The crowd was shocked and astonished with Stache Bot’s fight and ability to keep on pushing. As Stache Bot rounded the corner on one skate, the crowd fell silent. Gaping mouths hit the floor and anticipation flew through the roof. She was able to successfully complete the jam, leading the Hot Wheelers to victory, as dedicated fans screams thundered and echoed through the warehouse. The final score was 198–195, but the Black Diamond Divas—ahead on total points for the season—are still slated to compete in the WRD Beehive Brawl Tournament. The tournament will take place Oct. 17 and 18, where four of Utah’s best roller derby teams will duke it out to win the title of best in state.