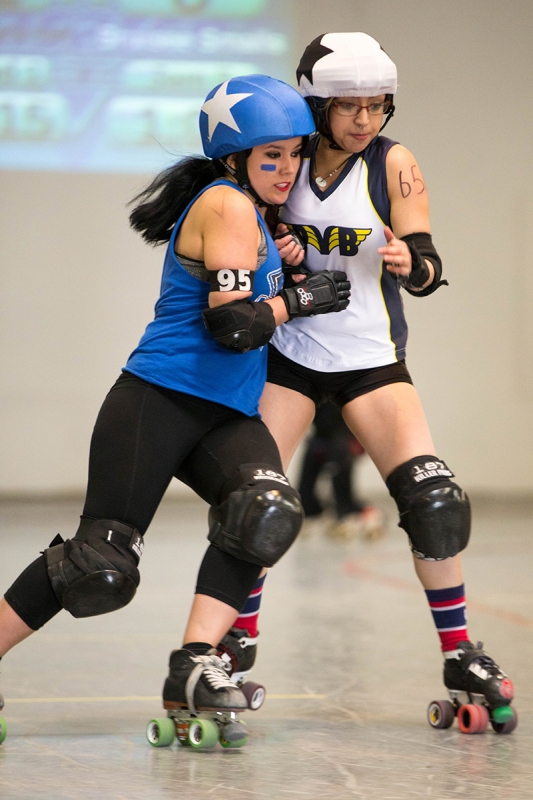 On April 11, Wasatch Roller Derby hosted a double-header bout at the Derby Depot. The first game was between the Bonneville Bone Crushers (WRDs B-level travel team) and the Portneuf Valley Bruisers of Pocatello, Idaho. The Wasatch Roller Derby was skewed in favor of BBC, since PVB only had eight players there. Although the PVB played hard and kept going, the players were exhausted by the end of the first half. Stache Bot 5000, a jammer for BBC, scored over 40 points in Jam 16 during the first half. BBC kept Portneuf from scoring by creating tight, unbreakable walls of defense. Chiquita Wabamya (BBC) was a valuable blocker, who continuously hit PVB’s jammers out of play. Although PVB was having a difficult time breaking through the pack, their main jammer Killswitch Enskate was able to get lead jammer several times. At half time, the score was 208 BBC to 48 PVB. Stache Bot helped BBC gain the lead with her stellar jam. Jam after jam Stache was able to not only break the pack, but knocked down most of the players she came into contact with. She utilized both her blocking and jamming skills to keep PVB’s jammer from breaking the pack. Bruisee Smalls (PVB jammer) had difficulty breaking the pack due to the hard work of Chiquita and Sookie Slaphouse (BBC), who were able to constantly knock her out of bounds and hold their defensive wall tight. Killswitch Enskate jammed multiple times in a row, only to be relieved every so often by one of the blockers. Although PVB was able to get a power jam in the second half, they were still unable to catch up to BBC. Near the end of the Wasatch Roller Derby, one of BBC’s jammers, Makillda, lost the front truck on her skate and fouled out at the same time. She gracefully skated on two wheels to the penalty box. While Makillda was in the box, Bruisee Smalls was able to score 10 points in a power jam. After fixing her trucks, Makillda was able to get back on the track and continue scoring for BBC. Although PVB fought hard, the Bonneville Bone Crushers took the victory with an overwhelming win of 348 to 89.
The second game the Wasatch Roller Derby hosted was between their two home teams, The Black Diamond Divas and the Hot Wheelers. At first, the Black Diamond Divas seemed to have taken the lead, but they were continuously trailed by the Hot Wheelers. In the first half, the Black Diamond Divas racked up a 34 point lead, thanks to Sookie Slaphouse, who scored 15 points in one jam. The Hot Wheelers were able to achieve lead jammer several times, with their jammer MegaStorm scoring 13 points. Once the second half of the Wasatch Roller Derby, the game started to heat up. Players were getting hit off the track left and right. In the eighth jam of the second half, Makillda was able to bring the Hot Wheelers into the lead with a score of 122 HW to 118 BDD. The Hot Wheelers were consistently battling for lead against BDD’s jammers. In jam 14, Wreckless and Makillda fought for lead, chasing and hip checking each other around the track. Once again, BDD took the lead, only to have the Hot Wheelers catch up in jam 19, where Makillda scored five points, giving the Hot Wheelers a one point lead (150-149). Everyone in the crowd was on the edge of their seats as each team continuously stole back the lead from the other. In the 21st jam, Wreckless put BDD back in the lead by scoring several points in a power jam, giving the Divas a 5 point lead (154-159). Although Stache Bot scored the highest points in both games with her jams, Makillda was the MVP jammer in the second bout in my opinion. She fought hard to help the Hot Wheelers gain the lead consistently against the Divas. In the last jam of the Wasatch Roller Derby, both jammers ended up going to the penalty box. With only thirty seconds left, the Divas were able to score one more point, winning the game 155-159.
Photos: