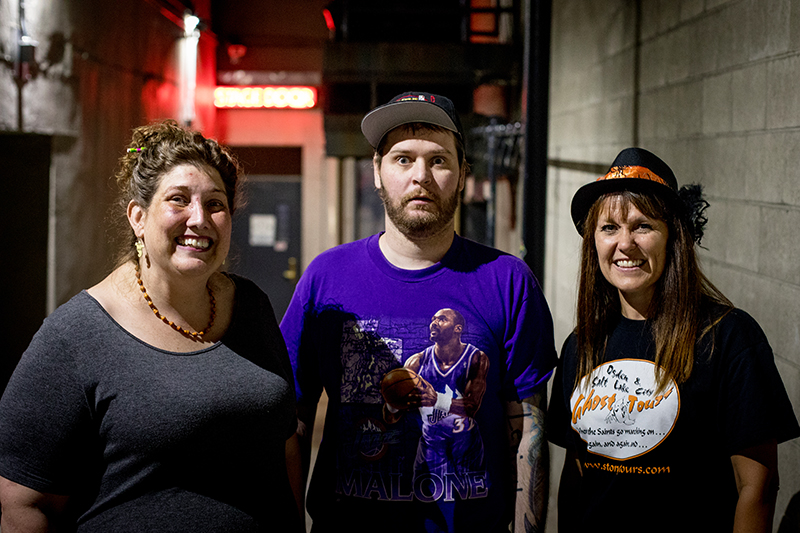 Salt Lake Story Tours: I Ain’t Afraid of No Ghost

If you think of all the billions and billions of people that have died over the course of humanity, then you gotta assume that there are a shitload of ghosts haunting the world. Last October, I met the ghosts that reside in the SLUG office, but this October, I wanted to see what ghouls were kicking it Downtown.

I got ahold of Utah Ghost Tours to hopefully meet some of the ghosts I’ve heard of for awhile and learn about some new ones. Utah Ghost Tours provide bus tours and walking tours to some of the most haunted spots and graveyards in SLC and Ogden. I opted for the Whiskey Street tour, which started at the Courthouse on 400 South and Main Street and ended at the Capitol Theatre, where a ghost named George notoriously haunts. 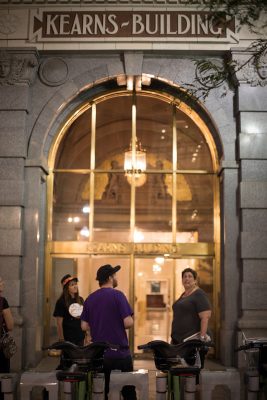 Go ahead and complain about Salt Lake these days all you want, but the fact is that we have a cool and unique history. Utah Ghost Tours doesn’t just try to scare the crap out of you: The walking tour intertwines the history of the buildings and the people that the ghosts fuck with. My story guides, Kristen Clay and Nannette Watts,were quite knowledgeable of the way things used to be Downtown.

Learning about some of the buildings I’ve drunkenly stumbled by thousands of times was also pretty cool. I had no idea how many brothels Main Street had back in the day—turns out it’s a lot. It really sounds like Mormons back then weren’t as uptight and ashamed about sex as they are now.

One of the stops on the tour was a bar I used to work at called Whiskey Street. Whiskey Street is what those few blocks on Main were nicknamed back in the late 1800s due to the amount of bars and brothels that where crammed down there. Vice cops and the DABC were probably a whole lot cooler back then, too.

I never noticed the bar being haunted when I worked there. The only scary things about the place were my paychecks and the MILFs that frequented the spot. But apparently, my old manager Chip told the Ghost Tour ladies that it was for sure haunted by a little girl.

This little-girl ghost likes to knock the empty bottles off the top shelf of the bar, and I remember this happening when I worked there. I always thought it was a combination of humidity and maybe faulty bar design, but nope, it’s a ghost. Granted, Chip is in that bar more than I was. But if it’s a little-girl ghost, Whiskey Street better kick her out quick before they get a violation for letting an under-ager into the bar. I could seriously see the DABC fining them for that.

I don’t want to give away any more of Kristen’s or Nannette’s stories because that’s their inventory. But I will say this: Almost every old building that they had a story about had one of those old freight elevators—well, almost all the ghosts like to mess with those things. Those elevators aren’t just not up to code. Oh, and every ghost story initially starts with a dead body. A lot of peopled have been offed or offed themselves in downtown SLC.

For obvious reasons, you cannot record stuff on the tour, but the ghost ladies do let you take pictures. Oftentimes, ghosts pop up in pictures without us initially knowing. And they can show up in the form of orbs. I was ready to click away with my trusty iPhone 7, until Kristen informed me that Samsung phone cameras pick up more ghosts and orbs. Once again, Apple’s technology isn’t as good as advertised.

Luckily though, SLUG photo-grunt John Barkiple was on the tour with me snapping photos like a madman with an actual fancy camera that can’t make phone calls or text inappropriate messages to your ex at 3 a.m. After the tour we grabbed a drink at the Hotel Monaco, which was one of the haunted stops, and scrolled through the pics Barkiple took looking for orbs. I didn’t initially see any but maybe they show up after you develop the film.

We asked the Hotel Monaco manager if we could check out one of the haunted stops that’s in Bambara and get another photo and she graciously obliged. The spot in the restaurant is nicknamed Stairway to Nowhere, and it’s literally a set of stairs that go nowhere. I’d tell you the story, but you should take the tour and have Nannette tell it, as she would do a much better job than me. I sat on the stairs, and Barkiple took some pics as I tried to channel some spirits.

I really wanted to see or feel a ghost, but I’m not sure if I did or not. According to most burner chicks I’ve met who put way to much stalk in astrology, my aura is fairly dark these days. And the only spirits I channel go straight through my liver. But either way, I enjoyed the Salt Lake Ghost Tour a lot and will probably go back with them to check out some graveyards. The history lesson alone is worth it, even if you don’t believe in ghosts.