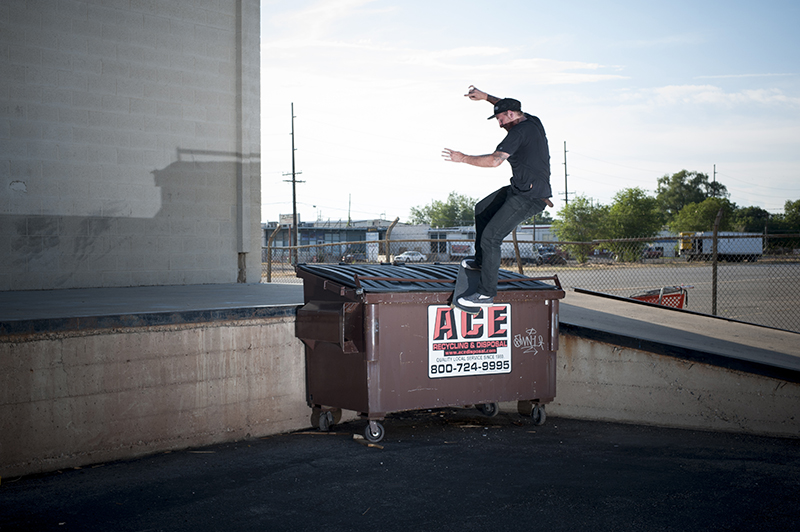 Much like fashion and music, skateboarding is cyclical.  Tricks and spots come and go, some disappear completely (especially spots), and some return with a vengeance years later.  There is a lot of evidence of this in skateboarding currently, with tricks and clothing from the 1990s being even more popular than they were in the decade they came from. It seems that cargo pants, baggier clothes, smith grinds (did they ever go away?) and wallies/wallrides are everywhere these days. I’ve even witnessed small wheels on a few boards recently.

This spot, which I’ve always known as Ricky Cheney, named after the person who found it, was popular 10 years ago.  The spot consisted of an uphill metal ledge and a red polejam. Rick McCrank and Adam Dyet both had tricks on the polejam and a lot of people in local videos skated the ledge. Currently, the ledge has large knobs installed to prevent any kind of grind or slide, and the polejam was removed several years ago.

While it’s not possible to skate the ledge and polejam that made this spot popular, it’s started to come back on the radar. Woody had a trick in Hathenbruck’s Netnet edit here last year, and this dumpster showed up as a possible spot recently. All it takes is a little time and seeing things a different way to revitalize (skateboard-gentrify?) an old spot. Thanks to Cameron Starke for seeing the possibilities rather than difficulties and Ricky Cheney himself for discovering this place many years ago.