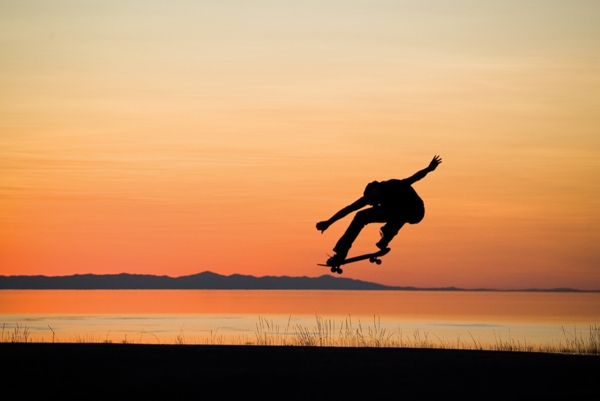 “He’s a swindler, a shyster, a cynical bastard,” says local skater and SLUG Mag writer Tully Flynn, of his friend for 14 years, Jared “Snuggles” Smith, “He’s family [though] and I have come to appreciate his goddamn given talents.” “He’s basically my surrogate older brother,” says Sean Hadley. “I would be fucked without him. I sleep at his house like every night. He is always down to help out a friend in need.” Hadley has been friends with Smith since middle school and has shared multiple skate video parts with him such as the Milo video Cosa Nostra and the Salty Peaks video Makin’ Moves. 28-year-old Jared Smith, more commonly known by the nickname Snuggles (which he was given on a skate trip when he was found napping in the grass in a passionate embrace with his skateboard) has been pushing around the skate scene for more than 15 years. It all started for him back in Lawrenceville, Georgia doing early grab cannonball ollies over sewer lids. By the time he was 13, his mind was made––he ­would either fulfill a career as a skateboarder or produce the artwork on the bottom of the boards.

Growing up, Smith traveled around the world with his father, an accountant for the Mormon Church, who would move from one country to the next adjusting church budgets and helping to build new LDS temples. From a very young age, Smith was exposed to the jarring realities of living in countries riddled with destitution. “There were days when Americans couldn’t go out in the streets…I was about six or seven…I remember my brothers and I got jumped for our shoes at knife point. I grew up thinking that was a normal occurrence,” Smith recalls from his time living on the dirt streets of Buenos Aires. At age 12 his parents split up and Smith moved to Mexico City with his father. “We lived in a spot where people had makeshift fences with broken bottles glued to the top of the fence to keep people from breaking into their homes. What was really captivating for me were the rolling hills of pink, orange and green shack houses covering the land,” Smith says.

“I would be fucked without him.”

Living in environments like these were the building blocks for Smith’s humble, honest approach to life. After Mexico City, he came back to the states, living in Utah for around a year before leaving for Germany on one last worldly adventure. In Germany, he was exposed to a different way of living. The European lifestyle differed from the “American way”­­––it was more about having fun. “You work so you can enjoy life, you don’t live to fucking work. I just got that European lifestyle: be happy enjoy life and have fun,” says Smith. Upon moving back to Utah, skateboarding started taking over on a ferocious level. He has had a part in almost every major Salt Lake video from Loco 48 to the Binary video Does Not Compute, both Mutiny I and II, DH 48, the Random Lurkers videos Claim Jumpers and Test Monkeys, True Passionate Thugs and most recently Erik Jensen’s video Weast Infection. “I remember Smith in skate videos doing every trick I ever wanted to do. He was just a little kid so I hated him for it,” says SLUG writer Dave Amador.

Determined to follow his passion for skateboarding, a week before his 18th birthday, he jumped into a car headed for L.A piloted by local skateboarders Mike Hayes and Dan Hadley. He spent his days skating and eventually a chance kickflip landed him a contact in the movie business. “I was out one day skating around, I kickfliped up a curb and this business dude was like ‘Hey do you want to do that kind of stuff in movies?’ He gave me his card and set me up with an account to see what was available the next day,” says Smith. He would call the account number daily, see what jobs were available and started earning a living doing extra work in movies. He landed a multitude of gigs––everything from Get Real and Malcolm in the Middle to being Doogie Houser’s stand in and even landed a one-liner in the movie Delivering Milo. This romantic lifestyle only panned out for eight months though. Smith was young, fresh out of high school and inexperienced with living on his own. “We were a couple of youngin’s testing the waters of a new state. Three of us lived in a tiny little studio and it just didn’t work,” says Smith.

“You work so you can enjoy life, you don’t live to fucking work. I just got that European lifestyle: be happy enjoy life and have fun.”

In 2000 Smith returned to Utah, the dream of becoming a pro skater still burning wildly inside him. In 2002 he took a second run at California. This time moving to Carlsbad with pro skaters James Atkin and Jon Allie with the main goal of making it in the professional world. He started meeting all the right people and pushing himself in the right direction to fulfill his aspirations.  Living in Carlsbad gave him the opportunity to see the truth behind a professional career and ultimately changed his mindset. “I remember meeting Mike Carroll and Guy Mariano and seeing them so stressed out about getting their photo or meeting a deadline. I didn’t want to be like that. I just wanted to skate,” says Smith. Smith put an immense amount of pressure on himself to succeed in the pro skate world, it began to affect his physical ability and eventually led to a broken ankle. “I started injuring myself because I wasn’t doing it for the right reason,” says Smith.

“He’s a swindler, a shyster, a cynical bastard.”

At 22, Smith left California and returned to Utah. He enrolled in Dixie College for one short semester before a run in with the cops and a strict possession of marijuana charge got him kicked out of school and landed him in drug court. Not wanting to stay in St. George, Smith transferred his drug court up to Salt Lake City where he started filming for the Random Lurkers skate video and taking care of probation. Probation wasn’t all bad though––it kept Smith sober and motivated to skate. This was around the time when local professionals Mike “Lizard King” Plumb and Adam Dyet were starting to make a big impact in the skate world. Smith, being close friends with both Lizard and Dyet, started to rethink the possibility of becoming a pro skater and ended up on a chance road trip with Lizard, filmer Brian “Slugger” Forwood, pro skater Nyjah Houston, and SLAP magazine photographer Sean Peterson. That skate trip led to Smith having photos published in SLAP magazine. “Peterson totally wanted to blow me up but, I was like no I want to skate just to skate,” says Smith.

At this point, skateboarding took a back seat and his second childhood passion, art, began emerging as the new focus of his life. He was always sketching as a kid and involved in art classes. In his early 20s, the art of stencil making became his preferred medium. He drew inspiration from artists like Banksy, Alphonse Mucha, M.C. Escher and locals like Mike Murdock, Dave Dolmen, Andy Pits and Trent Call. What started as simple one-layer stencils eventually evolved into meticulously hand drawn and shaded, technical multi-layered stencils.

“Peterson totally wanted to blow me up but, I was like no I want to skate just to skate.”

In 2005, Smith noticed stencil artists using Photoshop to trace the layers they wanted to cut out.  This development made Smiths feelings towards the medium turn sour. “It’s not street style, it’s easy, in my eyes it’s cheating,” says Smith. He started looking towards new mediums of art––like refining his drawing skills and using acrylic paints. Over the past year, he has been working with SLUG Magazine doing illustrations for Skatepark Etiquette and Mike Brown’s column. This work helped him receive a pell grant for schooling at the Salt Lake Community College. Smith says his goal is to develop his skills with programs like Illustrator and Photoshop to produce well refined professional work. From a business standpoint, he wants to stay involved in the skateboard industry making a living designing and producing artwork. “Skateboarding has given so much to me I just want to give back and stay in the industry my whole life,” says Smith. “I’ll generate the energy and power I need through different people and resources to end up where I’m supposed to be.” Smith is a man with unsurpassed drive to obtain his ambition. Without question this will not be the last time you hear of him.