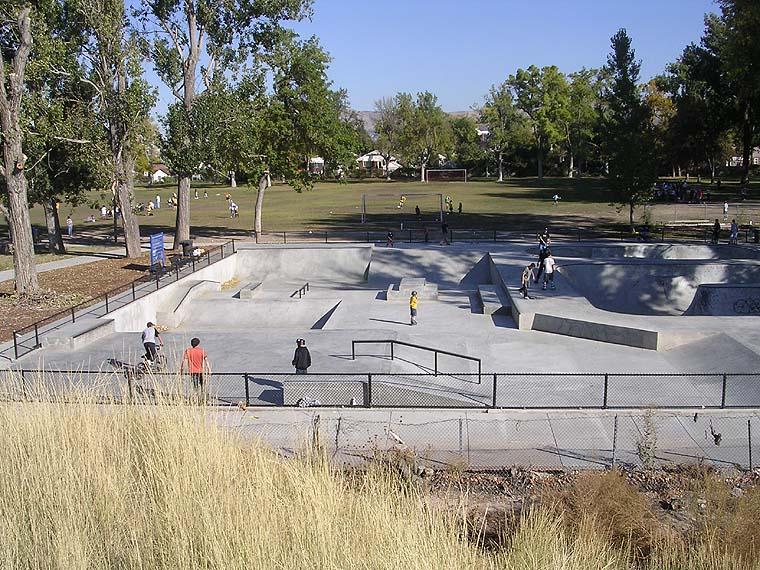 The University of Utah and Sugarhouse areas of the Salt Lake Valley were somehow overlooked in the wave of new public skate parks that swept through Utah in the past two years. This was scheduled to change in May of 2004 with the opening of Fairmont Skatepark. Just off the north side of I-80 at 9th East, there is now a 15,000 square-foot concrete oasis fenced off and empty (at least it’s empty when security is around). Before security was increased, there were multiple days with 50 people at a time inside the fence that surrounds the park.

The Fairmont skate park was designed by Site Design Group, a recognized leader in the design of skateparks throughout the world. In Utah, they are also responsible for the public skateparks of Park City, Logan, Layton, Oakley and soon to be Clearfield and Bountiful. Colby Carter, Brad Seidlecki and Lisa Saylan of Site Design were happy to do some Q&A regarding the ominous un-opening of the Fairmont Skatepark.

SLUG: How was Site Design involved in the project?

Lisa: We were actually a sub-consultant to a local landscape architecture firm [Stapp Construction was contacted for comment but didn’t return any of SLUG Magazine’s phone calls or e-mails.] who primed the project. If we had had any say on the budget and how it was spent, more funds would have gone into the actual construction budget.

SLUG: So when was the decision made to reject sections of the current work?

Colby: We sent someone out to do three site visits during the construction of the park. On the first two trips, everything looked fine. On the third trip, there were parts of the peanut bowl and the deep end of the pool that I had to reject. The geometry is not what we agreed on. The transitions in the deeper pool sections are not correct, and the coping needs to reveal itself 1/4 inch all the way around. These are imperfections that can only be recognized by a skateboarder, and they make a big difference. We’re going to stay on it and make sure the skaters in Salt Lake City get a legit park.

SLUG: Have you ever encountered situations like this before?

Brad: We ran into the same problem at a park in California. The transitions were not built per plan and when we went out there for the final walk through we rejected the work. The city went after the contractors performance bond and used that money to hire another contractor to finish the job correctly.

“Our design architect has raised questions about whether the park has been built according to the city’s plans and specifications. They are working with the contractor to verify whether this is this case, we cannot open the park until we are sure the facility meets the City’s plans and specifications. The main reason being safety concerns, we factor safety in what we put into the plans, that’s why it has not opened yet,” he said.

At first glance, the pristine concrete would seem flawless to someone who knows little about skateboarding. However, the areas of the park that are in question are far from being correct. Site Design’s standards are high.

They’ve built the best skateparks in the world. Colby alone brings over 20 years of skateboarding experience to the table and has designed over 60 skateparks throughout the U.S. and overseas. Site Design was also involved in the recent overhaul of the infamous Encinitas YMCA Skatepark in southern California.

Although the Fairmont Skatepark is officially “closed”, it was thriving with skateboarders before its completion. I’ve had one opportunity to skate the park, along with every other kid that’s dared to jump the fence. These days the police and other hired security have been keeping an eye on the park night and day, even when it’s raining.

Unless you feel like racking up a few extra misdemeanors on your record, I’d steer clear of this park until further notice. A neighbor of mine has to go to court because he got nabbed skating there a few days ago. He’s 10 years old.

“Two policemen showed up, one in the parking lot, the other drove his car through the park,” he said. “There were maybe 12 kids there. We all got tickets. I have to go see a judge next week.”

There’s no word on when the park will officially be open to the public.