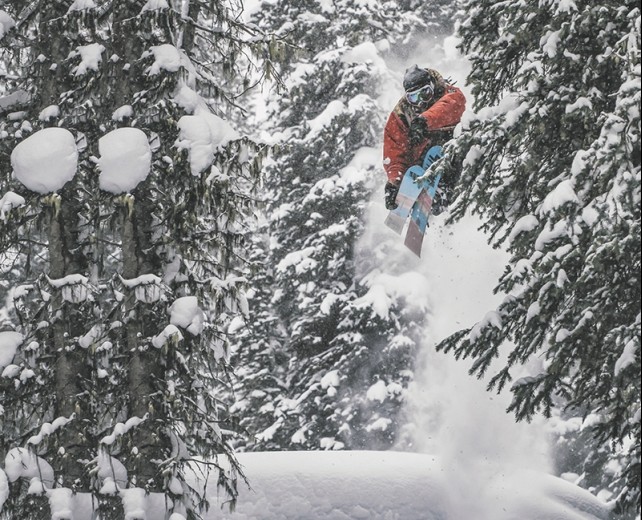 It has been interesting to watch and work with Miller in his ascension as an athlete and a driving force in the industry. He is the one who first connected me with 4FRNT Skis, a local manufacturer with a focus on athlete-inspired ski design. Wiley Miller’s skiing prowess secured his place with 4FRNT early on in his career in 2004 at the Camp of Champions skier summer camp in Whistler, Canada. By 2008, he started collecting a paycheck from them, and in 2011, he became part owner. Since then, his involvement with the company has allowed him to be a part of the process by actually designing skis to match his riding style. “I built a pro-model ski a few years ago, the YLE,” says Miller. “It was amazing—a big challenge for sure. There is so much math and geometry that goes into building skis, as well as material sourcing. That’s where things are really taking off at 4FRNT right now. We are doing amazing things with really cool materials, making the skis lighter and stronger.” In addition to ski design and filming, Wiley Miller has been an integral part of apparel development at 4FRNT’s next-door neighbor, Saga Outerwear.

When I first met Miller, he and his brother Jeremy had just moved into town from Montana. They had grown up skiing at Red Lodge Mountain, or as he calls it, “Rock Dodge,” due to its perennially thin snow pack. Those early days in Montana fostered his love for the sport and gave him the motivation to continue progressing. “I think getting to ski with my brother shaped the show the most,” Miller says. “We were always trying to one-up each other. He was better than me, so I always was trying to keep up with him.” Moving to the Wasatch full-time also meant spending a lot of days ripping big lines at his adopted home resort of Alta. “Park City was full of super good skiers, too—Austin Ramaley, Stephan Thomas, Kyler Cooley and Dylan Natale,” says Miller. “I wanted to ski with those guys, get better at park riding, and shred pow in Little Cottonwood Canyon when it was there.” With each coming winter, Miller continued looking to the future of his career and developed an increased interest in filming. “I linked up with Mike Hornbeck on a trip out to the Pacific Northwest to shoot with Theory-3 Productions,” says Miller. “I shot a segment with them and got nominated for ‘Breakthrough Performance’ at the Powder Awards (2007). That’s when I knew I wanted to film segments for ski films. I knew I could be good at it.”

This turning point served as a catalyst for Wiley Miller to stay on the grind and keep putting in the effort each season to get out and film with as many people as possible. Over the years, Miller has filmed with the likes of Teton Gravity Research, Level 1 and 4FRNT Productions. Recently, he has been able to film segments for the new ESPN X-Games RealSki contest. This competition challenges backcountry freeskiers to produce 90-second clips of their best riding and enter for a chance to win X-Games Gold. Miller has also been tirelessly collecting footage for his own film projects with YLESKI.com, which released its first edit last spring. For 2015, Miller is working with his mainstays of 4FRNT Productions and Level 1.

As with any pro athlete, it is important to have things that ground you as an individual. Miller likes to change it up and bring out his snowboard on powder days to keep it interesting—an homage to his love for surfing, no doubt. Additionally, he has taken an interest in flying airplanes after sharing an experience in Canada with fellow pro skier Rory Bushfield. That first flight spurred him into getting his private pilot license and keeping up on his hours with local flight clubs. Perhaps, one day, he will combine his two passions to produce a unique ski film.

Miller recognizes that his beloved sport is in a bit of transitional phase and that future riders should consider a few things: “Don’t forget about style; the Olympics are not the future of our sport; and respect mother nature by thinking about living a sustainable lifestyle,” Miller says. He goes on to say that he hopes the industry can stop putting a spotlight on overly risky decision-making in an effort to reduce the amount of serious injuries and fatalities befalling many professionals.

Keep and eye out for Wiley Miller this month on the snowy slopes of Alta as he continues to hone his technique and enjoy the freedom of the hills.