On the cloudy and not-so-chilly Saturday after Valentine’s Day, folks flocked by the dozens to the wintry slopes of Brighton Resort for the 2014 SLUG Games Goes Postal Presented by Scion. 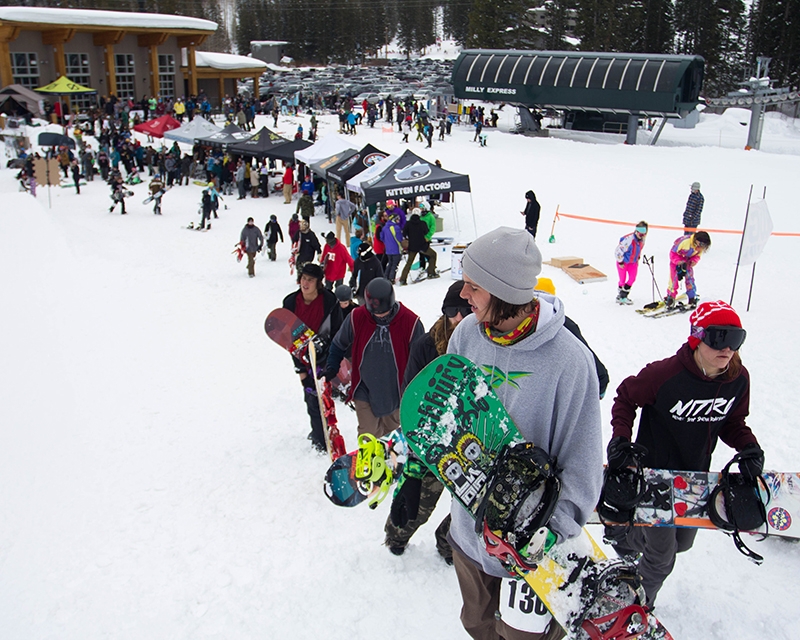 Levi Black and other snowboarders walk back to the top of the course. Photo: Paul Johns

On the cloudy and not-so-chilly Saturday after Valentine’s Day, folks flocked by the dozens to the wintry slopes of Brighton Resort for the 2014 SLUG Games Goes Postal Presented by Scion. Held at the base of the Milly lift, colorful sponsor tents flapped in the morning breeze as SLUG staffers and the Brighton Park Crew put the finishing touches on the course.

Designed as an open jam session, contestants had the choice of hitting a tube, down box, down rail (more cleverly referred to as a donkey dick by some of the more seasoned riders), close-out mailboxes to a dumpster, wall ride and a quarter-pipe with a mailbox—all of which was overseen by the bright orange SLUG sign that was lovingly crammed at the top of the course.

SLUG nabbed eight of the greats to head up the judges panel, with Willis Grigsby, Whitney Favrok, Cale Zima and Cody Lee on snowboarding, and Marisa Marten, Garret Bright, Damien Garcia and Dan Sammons on skiing. Their mission? To judge riders on three main criteria: creativity, style and technicality.

Warm-ups on the course were entertaining to say the least, and definitely foreshadowed the tone of the competition. The first heat to open was the 17 and Under Snowboard and Ski. The features were mobbed by skiers and boarders anxious to stand out to the judges. With one rider chucking a front 6 and another airing a backflip over the tube, the 17 and Under heat definitely brought their A-game. Judges selected five finalists from both Snowboard and Ski to advance to the finals.

The second heat to kick off was the Men’s/Women’s Open Ski. As the riders took to the slopes, a spontaneous dance party erupted in the sponsor village. With DJ Matty Mo laying down the tracks, spectators were treated to snow breakdancing and some unique moves by the ’80s neon Pit Viper twins.

Tyler Shores stuck out with his innovative style, and Alec Nelson was clean and consistent. We saw some amazing talent from other riders who threw down one-footers over the tube, and spread over the gap tube to the down rail. Although the judges were only supposed to pick the top five competitors to advance to finals, there were too many skilled riders to choose from. In the end, judges selected seven male finalists and three female finalists for the Men’s/Women’s Open Ski.

The third qualifying heat started at 1 p.m. for the Men’s/Women’s Open Snowboard. Waves of contestants spilled down the slopes, with three to four riders hitting the course at the same time. In short—it was chaos. After the initial surge, things calmed down enough for the judges to do their job. Riders favored the tube, hucking back 360s and cab 270s. Judge Favrok was impressed with the clean style the women brought to the comp, signaling contestant Isabella Borrielo as someone to watch. The heat concluded with eight male finalists and six female finalists for the Men’s/Women’s Open Snowboard.

As the Brighton Park Crew cleaned up the course for the finals, we hit the sponsor village to see what they thought of the contest. Eli Larkin from Jaybird Sport said, “This competition is rad. There’s so much more action on the hill and in the village than we’ve ever seen.” Gina Duffy from SheShreds loved the energy of the comp: “I’m impressed with how people are throwing down,” she said. The ski finals opened with a bang. These guys knew the awesome prizes up for grabs and were going big. Judges were impressed with unique moves on the tube, like the hand drag and the nose butter 270 on pretzel 270 out. Quinn Wolferman nabbed some serious style points with his hand-grab ski slide on the wall hit, and Tyler Shores killed it with his switch tail butter 270 onto the wall hit with a pretzel 450 out.

By 2:30 p.m. the snowboard finals were underway. Riders were definitely showing signs of fatigue, but that didn’t stop them from slaying it. The spectating crowd swelled in size with folks piling in to see the best of the best. Judge Zima said contestant Jeff Hopkins had “sick style” with his front 270 on the down-rail donkey. Tricks were over the top with front 3s off the wall hit, cab 270s on the down-rail donkey and even a frontside 3 off the dumpster closeout.

Deliberation was intense, with the judges going back and forth. Once the winners were selected, everyone gathered at the base of the course near the podium to hear the announcements. For 17 and Under Ski, Quinn Wolferman took First, with Jake Lewis in Second and Sasha Johnstone bringing up the rear in Third. In 17 and Under Snowboard, Jack Stevens nabbed First, followed by Cyrus Mogensen in Second, and Nickolas Slade in Third.

Tara Woodward was the single winner for Women’s Open Ski. In Women’s Open Snowboard, First Place went to Isabella Borriello, with Hailee Mattingley in Second, and Kelly Underwood holding down Third with her all-around great style.

Men’s Open Ski was dominated with Alec Nelson in First, and Tyler Shores in Second. Judges were impressed with Sam Hurst’s steeze, earning him Third place. Best Trick for Men’s Open Ski was presented to Chris Dakoulas for his 630 transfer from tube to box. Men’s Open Snowboard belonged to the lad rocking the Jazz hoodie, Alex Lockwood. His trick variety and unique style nabbed him First place. Holding down Second was Christian Hobush, and in Third was Jeff Hopkins. Best Trick for Men’s Open Snowboard went to Dillon Guenther, who nailed it with a gap backflip box to tube—seemingly the hardest line selection of the day.

Check out our photo gallery here.