Many incarnations of the SLUG Games have come to pass over the years, and while the themes and faces have changed, the partnership formed with Brighton Resort has stood the test of time. As 2013 rolled in with high pressure and clear skies, the first of two competitions began. Revenge of the Nerds Presented by Scion, Uinta Brewing and Busch Beer brought together the efforts of dedicated course designers, Games coordinators, and a host of Utah businesses to produce one hell of a good show. 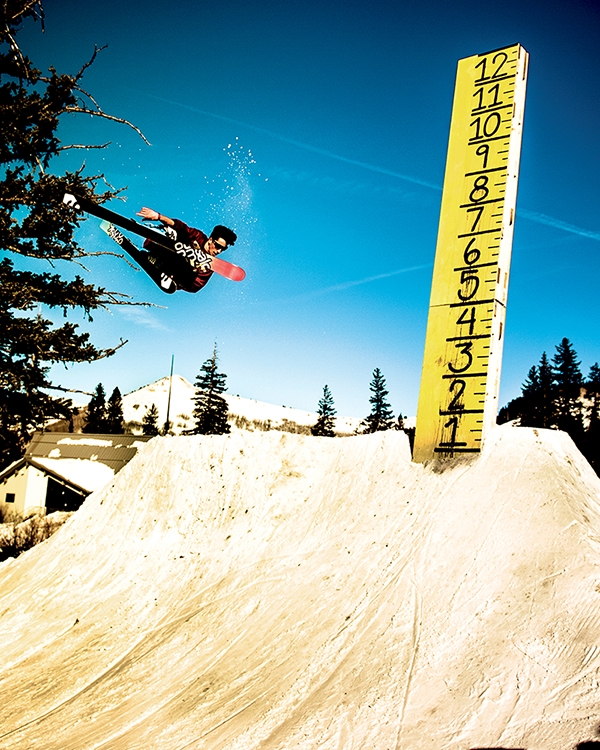 Thirteen years ago, SLUG Magazine brainstormed the idea to have a winter snowboard and ski competition. Various formats were introduced as the team of coordinators worked to provide a unique event that would attract the talent of local riders and the interests of local businesses. Many incarnations of the SLUG Games have come to pass over the years, and while the themes and faces have changed, the partnership formed with Brighton Resort has stood the test of time. As 2013 rolled in with high pressure and clear skies, the first of two competitions began. Revenge of the Nerds Presented by Scion, Uinta Brewing and Busch Beer brought together the efforts of dedicated course designers, Games coordinators, and a host of Utah businesses to produce one hell of a good show.

Saturday bloomed bright with warming temps and sunshine for days. The first light flowed across the venue and illuminated the awesome collection of features that awaited the competitors. Over months of planning and redesigns, the course engineers and Brighton Diggers came up with a simple and tight design that consisted of a rainbow box, flat-down box, flat-down rail, and, the course highlight, a 12-foot tall ruler jib built atop a quarter-pipe. A variety of side takeoffs allowed for multiple entries to the features and fostered creativity from the athletes.
A flurry of activity began to surround the venue as the sun climbed high and the beats from DJ Matty Mo filled the air. Mashups of metal, rock and hip hop from the house speakers set the perfect soundtrack for the shredfest. A field of 60 competitors eyed up their lines through the park and began warming up for the main events.

The format for the comp was a hike n’ huck rail jam that encouraged the riders to take full advantage of the course and utilize each feature during their runs. Judging the park-nerdery were a panel of qualified skiers and snowboarders armed with the knowledge to pick out the top tier athletes. They certainly had their work cut out for them given the heavy-hitting roster of local shredders participating in the event.

From the deck of the Milly Day Lodge, the booming voices of Brighton Digger Tim Kronenberg and local Renaissance man BJ Emery pumped up the crowd. Their hilarious banter kept the masses entertained as the competition kicked off just before noon.

The young-guns started things off and wowed the spectators with fearlessness that they wore on their sleeves. Although there was only a small batch of under-17s, they delivered quality runs for all to enjoy. A few flips surprised the judges and showed that they were here to thrill. “I thought the course was really smooth and not too lippy,” says 15-year-old Trevor Otterson. After their heat, the top riders moved on to the finals later in the day.

Next up was the Skier Open. A historically underrepresented group at the SLUG Games, these two-plankers still know how to have fun. A few females even joined in on the excitement and showed they could hang with the boys. The order of the day were 270 on/offs, and a few of them even got creative with some hip checks and butt-slides on the box features. It wasn’t long until they figured out that hiking up a bit higher in the start would give them the extra speed and advantage they would need to make it to the finals.

The largest group of the day was the Snowboarder Open. In the blink of an eye, the top of the venue was filled with an eager group of participants set to impress. Dropping into the course from all sides, they began their assault. Backside rail slides, wall rides, box transfers and big air out of the quarter-pipe gave the judges something to think about. “It was great how you could hit every feature from a different angle,” says Jeremy Seegmiller.

Once the prelims were out of the way, the judges made their decisions on who would get a chance at glory in the finals. During the intermission, onlookers meandered through the Sponsor Village and checked out the latest gear from local companies like RAMP Sports and Niche Snowboards. They were also able to check out the hottest rides from presenting sponsor Scion. Their zombie-apocalypse-mobile captured quite a bit of attention. Under the hot midday sun, the spectators could quench their thirst with cool adult beverages from presenting sponsors Busch and Uinta Beers. It was now time to return to the course and witness the afternoon’s action packed presentation.

Once again, the minors took to the course and vied for a position atop the podium. The rhythm of the young riders inspired the crowd, and they garnered cheers for their performances. These hucksters fully abused their young knees as they went big on every feature on the course. By the end, the standout performer was snowboarder Carson Adams taking home First Place. Makali Arnold and Tanner Canning came in Second and Third, respectively. For the skiers, Bijan Sherkat placed First, with Cage Kain placing Second.

By 2 o’clock, the energy of the place had risen to party level. It was a real homie feel as the Open Finals for ski and snowboard got underway. The enthusiasm from each rider permeated the venue and the competitors fed off of each other’s stoke. Nothing was sacred as the talent of the group picked the features apart. Huge transfer gaps onto the down rail and cleaver, one-footed slides across the rainbow box amazed everyone. Riders went for double digits on the ruler-jib and enjoyed massive hang time above the lip. Trevor Akimoto, a fourth-season SLUG Games competitor, lead the skiers with his smooth front 270s on the flat-down rail and his fearless airs across the course. “It’s really great to compete here for so long and do well,” says Akimoto. This victory represented his third victory in four years, one as an amateur and two in the Open Division. For his efforts, Akimoto walked away with a sweet pair of RAMP skis to hone his skills on. Sean Kennedy and Connor Clark grabbed Second and Third Place, respectively, and took home some great gear of their own. Skiers Tara Woodward and Carina Imbulgia grabbed the top spots in the ladies division. They learned a lot and will hopefully return for the next SLUG Games.

A fierce battle ensued for the top spot among the snowboarders as each rider tried to one-up the other. In the end, fourth-year SLUG Games veteran and three-time champion Brady Larsen came away with First. His overall fluidity and style secured his position in SLUG Games history, as well as a sweet Busch board. Jeff McGrath snatched Second Place for his perfectly executed one-footed slides. Third Place went to Dillon Geunther. An honorable mention to goes out Everest Arnold for his dedicated efforts and longtime participation in the SLUG Games. Jeremy Seegmiller secured Best Trick for his ballsy transfer gap. Along with the trophy, he scored a double-cheeked kiss form the Busch Beer Gals.

For the ladies, Samantha Kolesky went big and finished in First Place. “This was the best SLUG Games in a while. The course was fun, and it was a great third season for me,” said Kolesky. Rounding out the ladies were Grace Mayernick and Shannon Dillon. These girls have a bright future in the SLUG Games, and we look forward to seeing them and all the other great riders for the next event at Snowbasin on March 16.