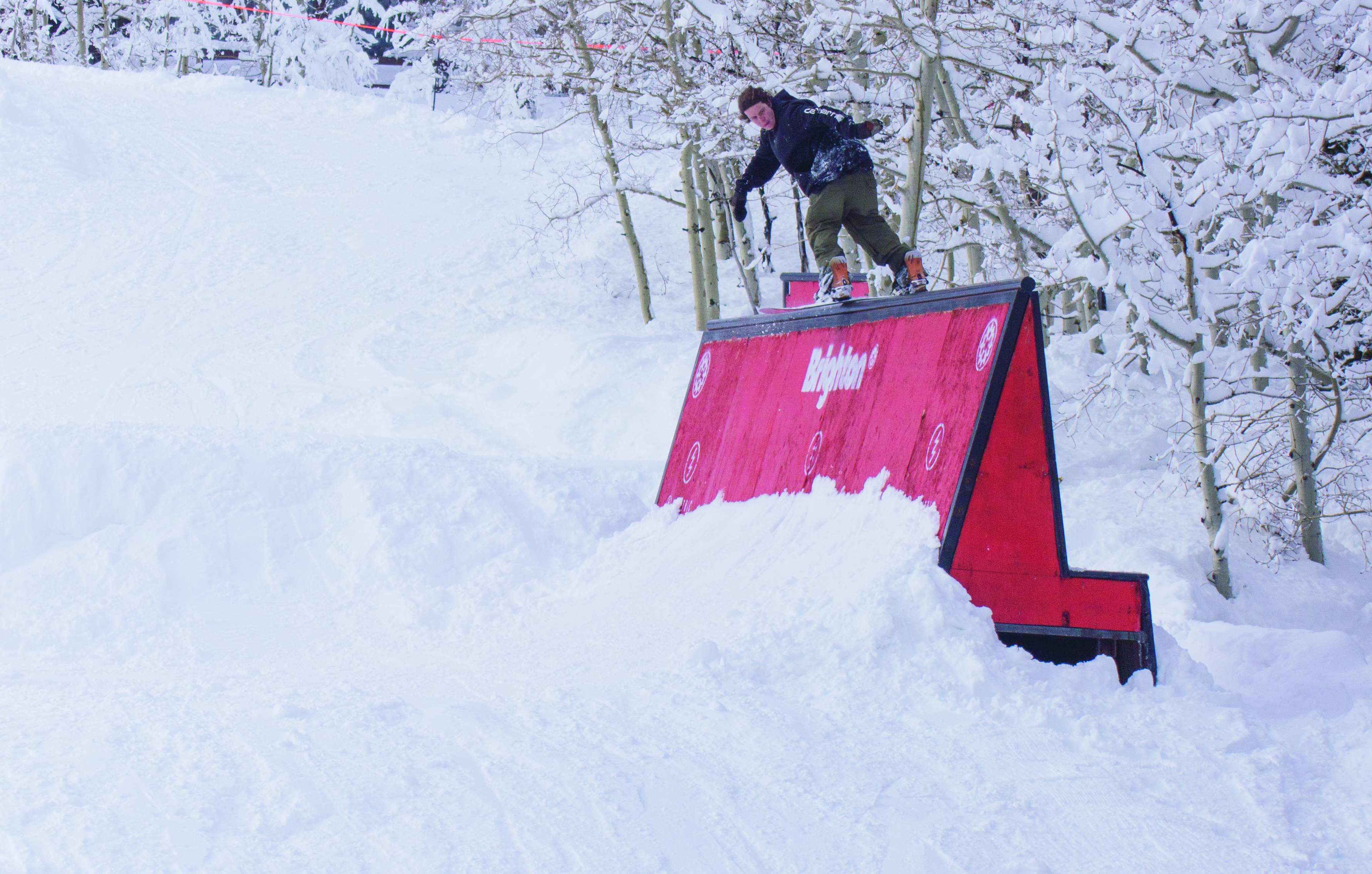 Stunts in the Sunshine – SLUG Games: Year of the Yeti Presented By G-Form, Mark...

The 17th annual SLUG Games: Year of the Yeti Presented By G-Form, Mark Miller Subaru and Monster Energy rail-jam contest was held at Brighton Resort in sunny Utah on Saturday, Feb. 11. Brighton is all about the good times, keeping our priorities in check and getting wild with friends—which is why SLUG Games is so well situated there.

Brighton Terrain Parks Manager Mouse—now in his sixth season as the head of this hard working staff, the master lip sculptor and flow analyst—was on hand all day to put specialty shovel to snow and direct his minions in the smooth operation of this outstanding rail jam.

DJ Matty Mo was in booth all afternoon popping, mixing and holding it down with deep grooves to pump up the competitors and keep the spectators warm.

MC Ben Bogart brought equal parts trick knowledge, congratulatory sound effects and heckling—I’d say he killed it. Bogart is clearly a jovial fellow who repeatedly gave credit for tricks originally executed by former snowboard-camp attendees whom he had coached—this is an example of the kind of camaraderie found in this tight-knit mountain community.

Best Trick honors went to Brady Durgins for his a cab 270 on 270 off the waterfall rail. Other notable big tricks included a backside boardslide to an extremely stalled-out shifty off the top of the wall ride by Jeff Hopkins. Best Crash went to Garret Calaway. An honorable mention for Best Crash went to Pat Fava, who executed, in his own words, “a double 360 to deck, to full scorpion,” Fava said. “I’m out here giving the people what they want—that’s what it’s all about”— which means that he came up short (distance wise) on a 720, fell down and slid on his chest/stomach region for a sustained distance. It was beautiful. Fava is not wrong: When you’re riding with your friends, the prizes and the official results are really secondary. For most people, the motivation is stoking their friends up to add to the excitement of an already excellent day.

And what about the winners? Well, everyone who partied with us was winning at life, but there were also contest winners:

Men’s 17 & Under Snow: 1st Place Henry Hawkins, 2nd Place Spencer Dallas and 3rd Place Ashton Davis. Before the contest I chatted with Hawkins, who just wanted to hit each obstacle on the course and maybe do a 180 off of the box. Instead, he did an inverted 540 in the quarter pipe, as well as a fast plant 540, which were big tricks on the day.

Women’s Open Ski: 1st Place Celine Fouquet. Fouquet fought despite competing in an uncontested category, pushing her comfort level and elevating her riding throughout the contest.

Men’s Open Ski: 1st Place Jonathan Klutsch, 2nd Place Ben Rotordo and 3rd Place Ian Russel. Let it be known that Mr. Klutsch is not scared. He took some big falls off the top of the wall ride, but didn’t slow down. He attempted rotations into and out of every obstacle on the course and stomped at least half of them.

Women’s Open Snow: 1st Place Sierra Jewett, 2nd Place Samantha Hobush and 3rd Place Rachel Westcott. Hobush stood proudly on the second step of the podium with her fairly fresh baby. Jewett won the section by greasing the C to down rail and multiple maneuvers on the flat box to down rail. “The contest was super good. [The ladies] all killed it. It was a great time and it was a beautiful day,” Jewett said about SLUG Games: Year of the Yeti.

Men’s Open Snow: 1st Place Makalu Arnold, 2nd Place Jeff Hopkins and 3rd Place Andy Chammaraw. Men’s Open Snow was the most hotly contested of the categories. Chammaraw said, ”I didn’t even know what the rail looked like [referring to the down, down down rail]. I just mobbed into it.” This was a fair representation to Chammaraw’s approach, just comfortable and excited. Arnold killed it on all features and was promptly crushed by all of his friends and a yeti after being declared the winner. All three spots on the podium for Men’s Open Snow were claimed by members of the Brighton Parks Crew. They love and live what they do.