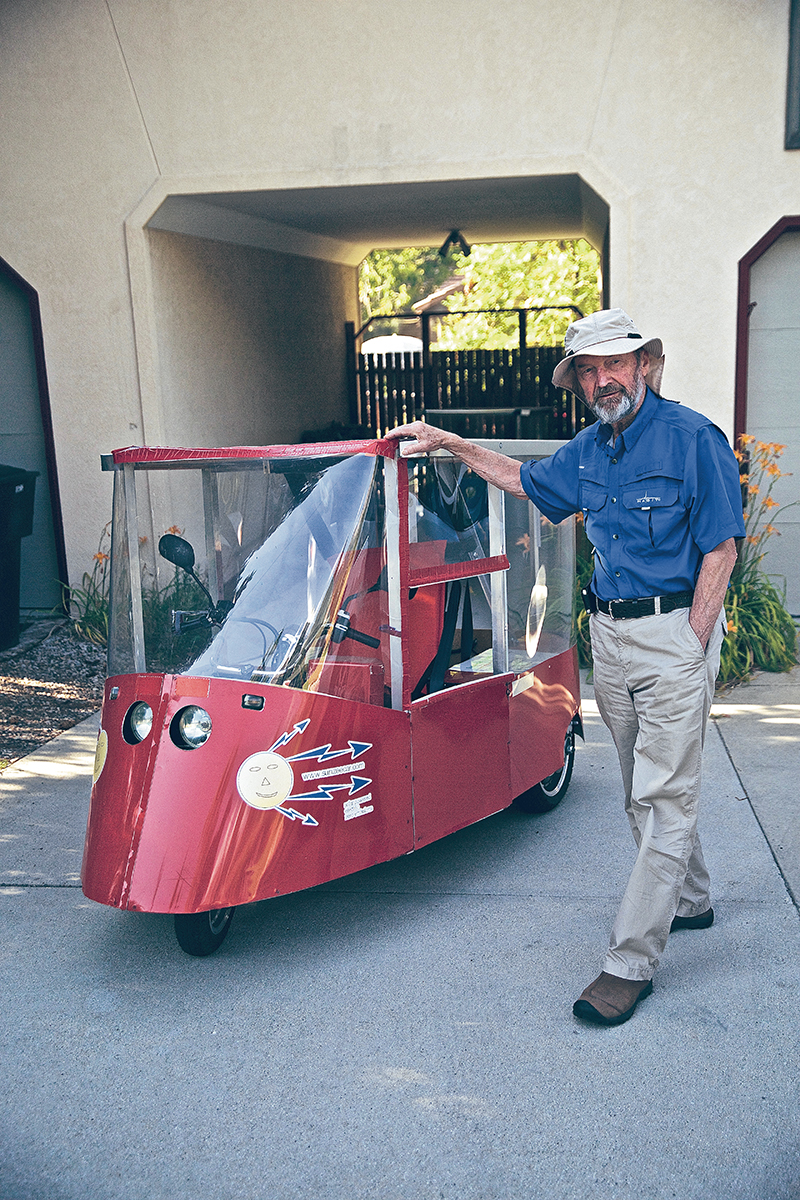 With the ever-worsening inversion looming over our heads daily, the need for sustainable energy is increasing tenfold. About 15 years ago, Utah local Dr. Andy Schoenberg took the initiative to design a vehicle that had the potential to be completely sustainable. The Sunzeecar EcoTrike is a small, three-wheeled vehicle that is powered by a lithium battery, which is charged by a solar panel that doubles as the roof of the vehicle. Perfect for city driving, the latest EcoTrike can travel up to 50 mph and can operate without an outside power source if used for short, local trips. Sunzeecar will be showcasing the EcoTrike at the 2015 Craft Lake City DIY Festival at Gallivan Plaza on Aug. 7 and 8 to demonstrate how the vehicle operates as well as explain to anyone interested about the many benefits of the car.

“It’s unique in the sense that this is a much smaller, lighter vehicle than a normal car, and it has 8 horsepower instead of the usual 100,” says Schoenberg, who explains that a smaller horsepower is beneficial for energy conservation. “As long as there is sun shining on the panels, you have power.”

For now, the EcoTrike will stay fairly small to keep costs down—the larger the car, the larger the battery and motor, and the more expensive the materials to build the vehicle.

Right now, the cost to build an EcoTrike is around $7,000, not including the cost of labor. However, as the technology becomes more affordable, the cost to build a car will lower as well. “I started with a much smaller vehicle that had only 60 watts of solar panels with only 1 horsepower, but it only went 25 miles an hour,” says Schoenberg. “Since then, the battery technology went up and the solar technology has decreased in price by a factor of 10,” he says.

The benefits to owning a sustainable vehicle outweigh the negatives. With the price of fuel increasing, the one-time cost of an EcoTrike will pay itself off in savings within less than 10 years, compared against the total cost of other electric vehicles on the market such as the Smart Car, which runs for about $18,000. In addition, there are tax benefits and other incentives—like free parking Downtown—to using an electric vehicle or EcoTrike, as well as other community benefits. “When [people] build high-rise parking structures, it’s costing around $50,000 per parking spot—the trike only takes up one-fourth of the space, and 75 percent of commutes are single passenger anyway,” Schoenberg says, explaining how the EcoTrike conserves in more ways than one.