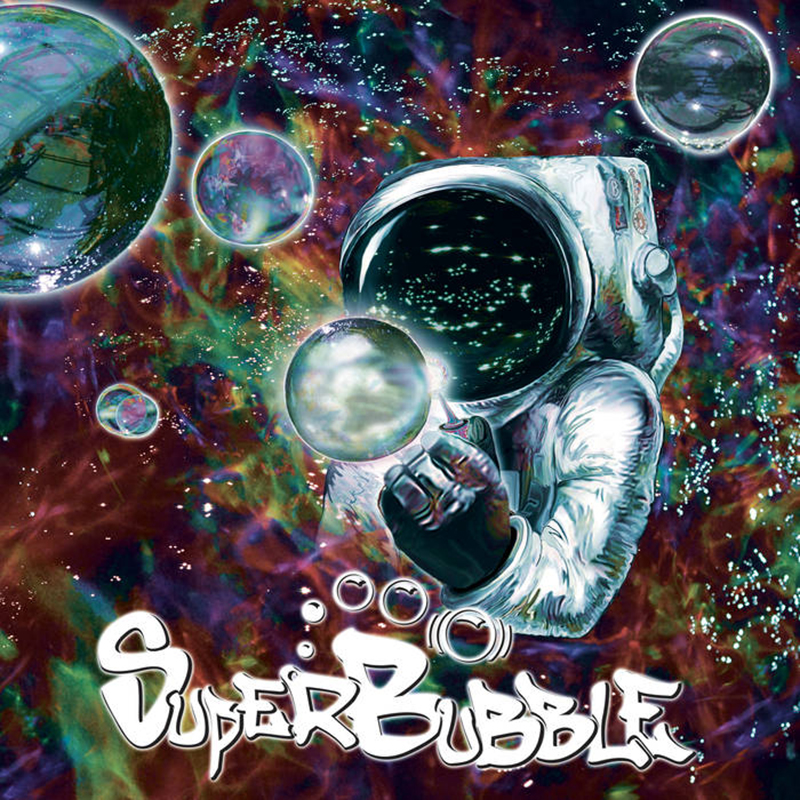 A thin layer of mist covers the floor of the club as Brandon ‘Simply B’ Barker speaks his sultry magic into the microphone. A trumpet flairs into life as Dave Terran puts his whole soul into a solo, and the lights dim behind the eight-piece band. “Holy Shit!” I exclaim, as Tim Ouburg’s organ chords descend from outer space and the guitar rips up a jazzy scale. Super Bubble are one of the biggest surprises I have encountered this year, with one of the most solid debuts I’ve heard out of the Salt Lake scene. This album is a fleshed funk fest of jam, jive and jazz, with a couple of the strongest instrumental tracks I’ve heard for years. If you’re unfamiliar with any of the names I mentioned above, or if you just want a short, sweet sample of superb musicianship, I strongly suggest that you avail yourself of Super Bubble.

Super Bubble gets right down to business with an opener that combines math, jazz and funk in just the right ratio. “Hype Squad” is the best song I’ve heard this year, and it’s going to take some serious groove for any other song to upset that position. Piano lines that waterfall over themselves, guitar rhythms that take off into space, and a slew of soulful licks from each instrument remind me of a tossed salad joining Squash and “Squib Cakes.” Super Bubble has a style that takes me back a few years to the days when funky rhythms and screaming trumpets ruled the music scene. Guitar licks that soar in “Sound of March” and the lyrically driven “Coming Home Today” showcase Super Bubble’s sound in style.

If you’re as unlucky as I am, you probably missed the release show for this bad boy, but don’t let that discourage you. You can get a taste of the band’s style and watch for any upcoming shows on the band’s Facebook (facebook.com/superbubbleband) to get yourself hyped. Funky vocals and guitar, flashy piano fills and rhythms that force my feet to dance make Super Bubble a superb example of why Salt Lake is such a great place in which to live and listen. Local talent sure doesn’t disappoint on this album! (Hog Wallow, 07.01) –Alex Blackburn