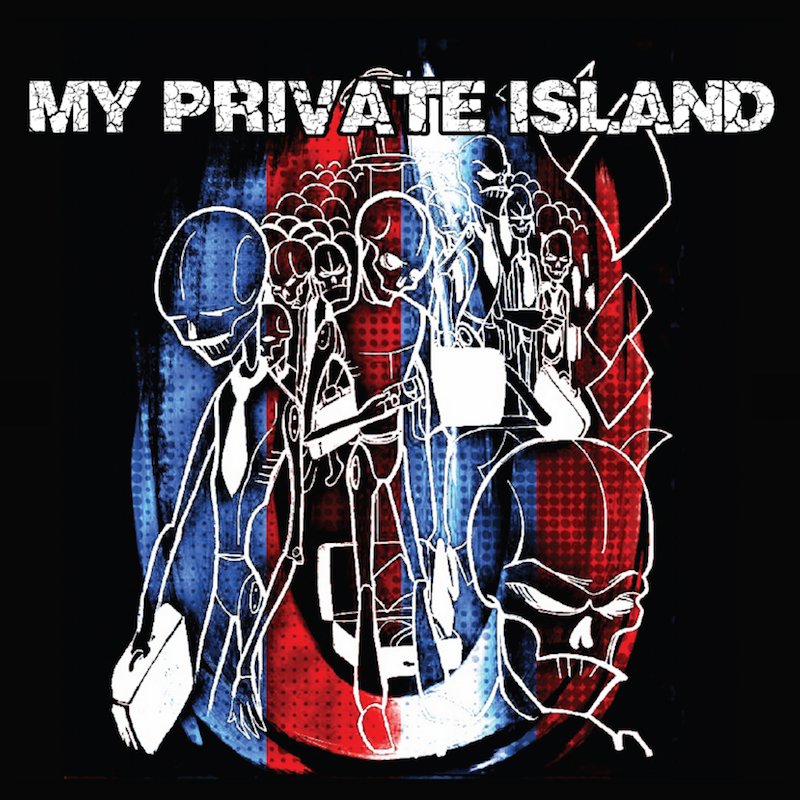 The chords are ringing thick. A steady drum beat drives the pulse, and a bright chorus echoes out over the mix. Deep bass rumbles through the atmosphere—and there I sit, eagerly taking in all of it. My Private Island impressed me with their self-titled debut release featuring a heavy rock vibe and crisp guitar solos. This album is good at keeping a strong, driving energy, but what’s really amazing here are the few songs like “Landing in the Limelight” that climax into an epic guitar shred!

Amid clever guitar licks, this album keeps things noisy and riff-heavy. Songs are distinct from one another, but occasionally, I felt that some riffs outstayed their welcome. The opener, “Ridiculicious,” sets a quick, heavy energy for the album, which carries strongly on for a few songs. Then, out of nowhere, “Change in Seasons” introduces a completely different side of the band. Heavy riffs give over to a Thirty Seconds to Mars–meets–3 Doors Down vibe—which, in context, feels a little out of place. Right after that, the hard rock is back—but country undertones re-emerge in a couple slower tunes at the end of the album.

My Private Island can really deliver a climactic finale, but I sometimes felt like an extra instrument would help flesh the intermittently barren section here or there. Fast and heavy is no problem for the band, but their slower tracks, like “It Was You,” are well … slow. The mix is great, so there’s no trouble hearing everyone—I’m just not hearing enough at times.

If I showed up to a gig with no idea who was performing and My Private Island was playing, I’d be stoked. This album proves that these guys can rock a set, which makes me want to bang my head, dance and hold my girlfriend’s hand all at the same time. Quick, grungy guitar arpeggios lend an air of metal to this album and settle nicely over the heavy ambience, while slower, relaxed progressions still keep the beat going and provide a little respite before building into groovy, jumpy jams! My Private Island will perform with Quiet Riot at Liquid Joe’s on April 22, which is a combo that I certainly don’t want to miss. –Alex Blackburn