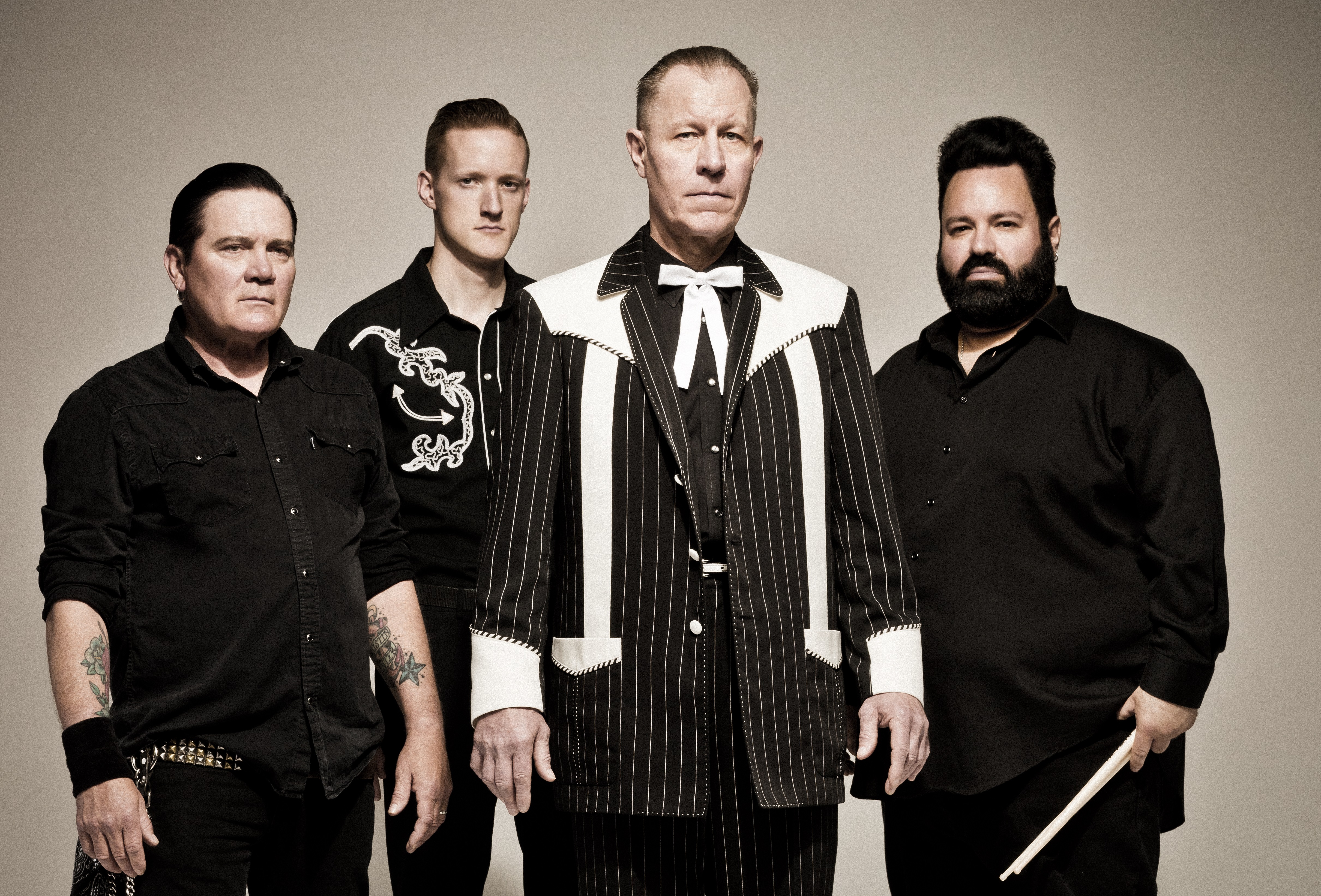 After over twenty years of avidly going to see live music, a few bands are bound to circle around a few times—and after so many shows and some stale performances, it’s hard not to become a bit jaded. Not to say I wasn’t excited for the show, but the line-up on Friday, Feb. 15 could have easily been one of those nights of the same ol’ shit we’ve all seen before. Little did I know walking into the Depot that night, that even though I’d seen all these bands, 4 to 7 times in the past, that each of these acts had major surprises in store for me.

The Delta Bombers opened up the evening, a hard-hitting rockabilly band that has just has much in common with AC/DC and the Ramones as they do with the Stray Cats. In the past, I’ve written off the Delta Bombers as “bikerabilly” or just a band that lacks any subtlety, but every time I’ve seen them live, they show growth and seem to add some element that makes them increasingly more interesting— whether that be jumping into genres like country, blues, or even ska, something I would’ve never guessed I’d see, they even went as far as enlisting the horn section from the Voodoo Glow Skulls to help them out. The Delta Bombers come straight at the audience, forcing the audience’s attention on them. Front man Chris Moinichen’s voice is the band’s most powerful weapon, his low, mean growl is other worldly and was best displayed on their final song of the evening— a cover of Howlin’ Wolf’s “Smokestack Lightning,” a tough tune to live up to but Moinchen was up to the herculean task. The band is entertaining and engages the audience well, and I can honestly say that I look forward to seeing them again.

Next up, the Voodoo Glow Skulls, who I haven’t seen live in a few years. For me, they were one of those bands that I loved a ton, but eventually as my tastes grew and changed I kind of lost track of—not that I ever actively disliked them—they just receded pretty far in the scope of my musical landscape overtime. That being said VGS couldn’t have been more legendary, in my eyes, when I first was getting into punk and ska. They’re a band that plays at breakneck speeds with horns and can hit a groove harder than anyone. Their set was full of humorous songs and was not like anything else. The band hit the stage and it’s a familiar scene, two guys paying sax and trombone, respectively, drummer I’d never seen before, but this band wears drummers out as often as underwear. Then there’s the familiar faces of Jorge, who is one of the best punk rock bass players to ever pick up the instrument. Then there’s Eddie on guitar who, for saying he’s almost always playing at blistering tempos, gets a lot of tone and color from his playing. The band starts things off sans lead singer, but Jorge, Eddie and longtime lead singer Frank all happen to be brothers, so I’m sure Frank will make his appearance shortly. From off the side of the stage comes a luchador masked man wrapped in a Mexican blanket-style poncho. Looking like some sort of aztec warrior, the figure grabs the mic and sets the whole next hour off. Not thinking too much about it, I assumed it was Frank under all that garb. This band had been around since ’88, so by my math, the longtime members are in their late 40s, but there’s not a single indication that they’ve slowed down a bit. Their cover of The Coasters ‘50s hit, “Charlie Brown” was a welcome highlight. Now during the first 8 or 9 songs, the lead singer is still wearing his mask, but he never stops moving and is an incredibly energetic front man, but I started to think to myself that I remember Frank being taller and his voice sounds a bit different— but the songs are fast and their live show is always chaotic. At what felt like about the half way point of their set, just after the lead singer had gone into the crowd and even the slam pit, once he was back on stage, with his back to the audience, he pulled his mask off revealing a full head of long hair and once he turned around, it was clear that this wasn’t the bald headed Frank. In a moment of confusion I nearly convinced myself that Frank was somehow shorter than I remembered and  had grown his hair out, gotten LASIK, so he didn’t need the big think rimmed glasses he’s always worn, but this was clearly someone else. I rolled with it, this guy, Efrem Schulz of Death By Stereo (I looked it up later), was a great at getting the audience going, and obviously knew what he was doing. The set finished and I reflected and came to this conclusion— although I wont ever think of them as the same band I spent my later teens listening to— I have to tip my hat to their fortitude in moving forward without the most recognizable member.

Now comes the headliner, Reverend Horton Heat, another band that I’ve seen many times, but they always turn it out. Their most recent record, Whole New Life, is fantastic and they’ve recently moved from being a three piece to a four piece, so it seemed like a great time to check in with the live show of one of my all-time favorite bands. Once the man, the myth, the legend Jim Heath hits the stage, its hard to watch anything else. The rest of the band sounds amazing, but you have this guy playing ripping guitar on his bright orange Gretsch, singing these high energy rock n’ roll tunes, and wearing a strikingly fabulous red western suit, he’s like something from another planet. They soar through 4 tunes or so before stopping for a breath. Jim looks like the rock n’ roll devil we’re all happy to sell our souls to. About this time, Jim makes a point to let us know that it was right around this time 30 years ago that stand-up bassist Jimbo Wallace joined the band after Heath met Jimbo in his apartment and noticed a Chuck Berry record in his living room. They then switched instruments and Jimbo on guitar shredded his way through a cover of Barry’s “Sweet Little Sixteen.” I noticed that the crowd was seriously feeding off the hard-rocking energy of the band, which is great, but these are top notch musicians that can play intricate complex music, something that gets lost when everything is blasting at 10— but that’s what the mob seemed to want. Another few tunes and Jim takes a moment to introduce their guest for the evening. Now, this is something Reverend Horton Heat has been doing the last few years, bringing a special guest out in the middle of their set and doing mutually loved covers and some of the guest’s material, as well. This evening we got, who Jim Heath called the greatest, living, rockabilly singer, Big Sandy, who rockabilly fans would be very familiar with he’s fronted his own band The Fly-rite Boys since the late ’80s and has carried the (very traditional) rockabilly torch for a long time. I was so impressed with how the band just switched gears and became an incredibly capable backing band, I’ve seen Big Sandy many times as well, and when they played his song “Chalk it Up to Blues” that sounded so natural, it could’ve easily been The Fly-rite boys themselves. The other thing is that you can see the Jim Heath gets the chance to just be the guy in the band rather than the focal point— which I can see as a nice respite from the spot light. After 6 or so tunes with Big Sandy, he made his exit and the band resumed their show. Heath explained that they had guests tour and perform with them that include Jello Biafra, Unknown Hinson, Mike Ness, but that all started with having Lemmy of Motorhead join them for a few shows, and to honor the deceased rock legend they played a blistering rendition of “Ace of Spades.” As the band went into my long time favorites “400 Bucks,” and “Galaxy 500,” I began to think about how these guys and Big Sandy, for that matter, are as much rockabilly and rock n’ roll legends and the guys from the ‘50s. They may not get the credit and the attention, but if it weren’t for these guys, so much of this music would’ve been forgotten. How many countless people have worked backwards from Reverend Horton Heat and started listening to Sun Records stuff or countless other roots rock n’ roll artists? They deserve their spot amongst the greats.

I’ve gotten the feeling from some folks that they check a band off their list after seeing them once, and over the years I’ve realized that a band or an artist can change and grow and seeing that evolution can be amazing and astonishing.