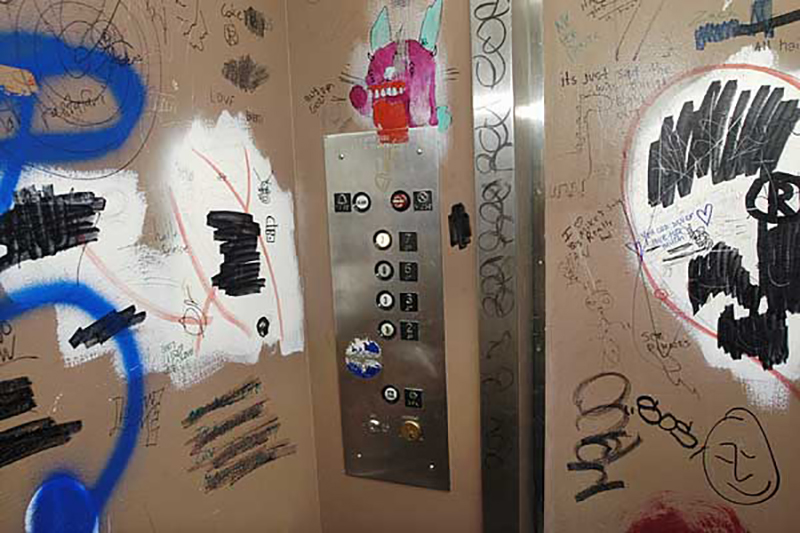 Graffiti, artwork and doodles cover the interior of an elevator in the Mosse Humanities Building. The elevator travels between the ground floor level and the upper floors of the building, where many aspiring artists and the department of art studios and are found. ©UW-Madison University Communications 608/262-0067 Photo courtesy: Jeff Miller

Local musician and producer Isaac Haas is back with Going Up, an instrumental tape with both style and finesse. Sharing names with a Purdue University basketball star, Isaac Haas is flexing his own particular skills on Going Up. The EP is six tracks long, and a great showcase of Haas’ talent as a musician. Each track is unique, but blends together to create a larger work, making the EP as a whole quite successful.

“Black Snow” has dub roots, but not in a typical dubstep style. Instead, the track is more chill, incorporating a classic reggae-inspired swing beat with simple and melodic trap instruments. The next track, “Empty,” has more of an early 2000s feel to it, using siren-like instruments in the track that bring an oughts style anthem. Songs like “OCT 2012” and “Sharks” are more modern. “Sharks” uses an EDM-style build, keeping the listener on the edge of their seat as the song progresses and builds.

“Troubled” is one of the strongest tracks on the album, and Haas is able to execute a very catchy, well-thought-out instrumentation. The beat has a laidback, Flume-like vibe to it, easing the listener slowly into the meat of the track. As “Troubled” progresses, Haas incorporates simple trap hi-hats, paired with a bumping bass line. This song could easily be paired with any type of rapper to showcase their skills.

Isaac Haas does minimalism well. Going Up is not too complicated—it stays on a steady plane while still remaining catchy. Haas stands out as a solo artist, but could also very easily work with any type of emcee or singer, local or national. If you’re a musician looking to collaborate, or just a recreational listener, definitely give Going Up a listen. –Taylor Hartman