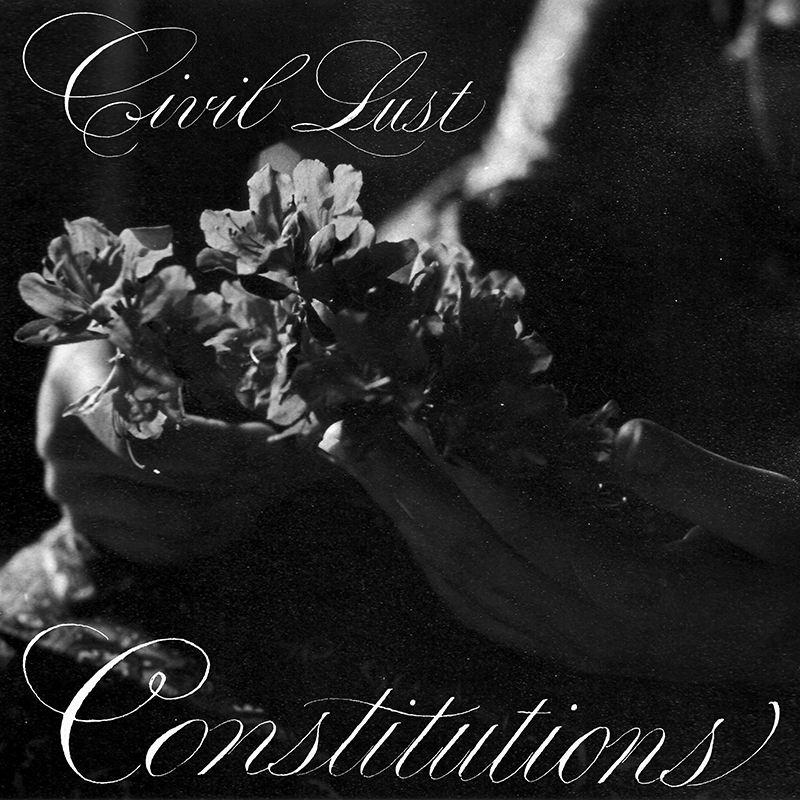 Civil Lust are a dark, sparkling gem that popped up on the local scene in 2016, and their anxious, broody sound is in good company because, as I’m sure everyone is aware, goth is reviving—it has been for a few years now. Every day, I am grateful that I don’t have to worry about buying tickets to another The Soft Moon show just for it to be canceled again, because Civil Lust, Fossil Arms and Choir Boy are local and play often. Civil Lust have the potential, I think, to become one of my favorite bands in town. The duo of Christian Riley and Isaiah Michael make a tight, crafty pair, and they deliver a pretty solid debut here, with every song emerging out of deep layers of murky, opalescent reverb, careless cries of inarticulable feeling and compelling, dark-edged guitar parts.

Constitutions starts off with a sample of audio that sounds like some kind of lecture, though what it is about is hard to tell. It’s a straightforward lead-in, ambient and smooth, with deep basslines that instill a lasting drama. The metallic guitar parts are well fleshed out and work their way through the songs like ebbing and flowing alarms (especially in “An Alternate Display”), with pushy, in-your-face percussion and the vocals of some kind of 21st-century vampirisim accompanying. Their basslines often ache of The Cure’s influence, which, of course, is not a bad thing. There’s even a flute-like synth part reminiscent of any of the weirder Cure songs that wafts through the slow-paced anxiety of the closer, “You’ll Leave Me Again.”

This doesn’t feel at all like a springtime album, but that just might be because the first time I saw Civil Lust was in the smoldering heat of late summer at Diabolical Records, or because of the last time, in the drafty cold of Big Iron, where their fog machine pumped an orange haze up to the chilly ceiling as their two dark forms pulsed and swayed, shadowy, on the stage. I think that this album is a bit caught up in a haze, too. Seeing them live is a pleasure, but I’m excited for them to continue experimenting and growing as time goes on. Whatever they do next is something to anticipate. –Erin Moore