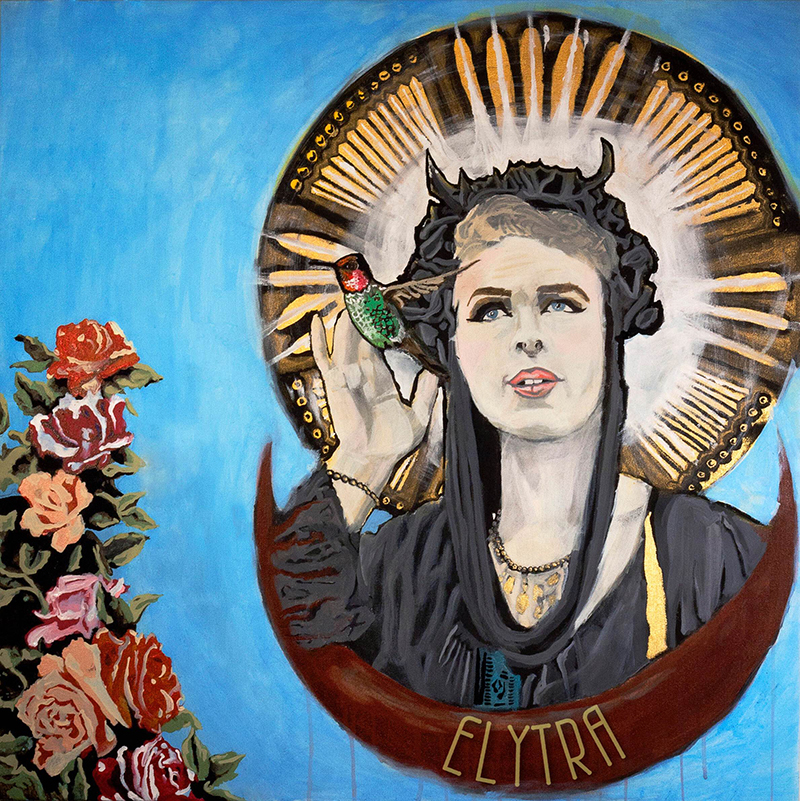 It’s no shocker that Elytra would quickly become successful in the local music scene, especially after opening for Grimes at the Twilight Concert Series. Elytra’s bandmates are powerhouses—each masters of their instruments—and it’s obvious while listening to Embers and Stardust. Scotty Ray has the vocal and lyrical prowess of the group. Secily Saunders creates soothing sounds on guitar while Janet Chotia provides a more somber mood on bass. Lindsay Heath brilliantly plays percussion, including piano and the plethora of various drums present in the album. Chris Murphy adds both funk and new-age vibes on synth, acoustic guitar and keys. Adding a unique touch to the album while enriching the new-age, gothic element is Tanner Crawford on cello. With each song, I thought to myself, ‘This one is my favorite.’ Elytra boldly brings up tough subjects such as addiction, mental illness and gender dysphoria—but does so without depressing or upsetting their listeners. In fact, Elytra is a much-needed burst of optimism and love. They combine ballad songs with new age lyrics and mix it in with groovy pop music. Each song is chilling, inspiring, heartbreaking and hopeful.

Scotty Ray’s lyrics are especially powerful. “Afraid of Me,” is a song that alludes to mental illness and gender dysphoria and is extremely heartbreaking to listen to. Lyrics such as, “Can you feel time?/It’s slipping quickly./Is this your truth?/A scar from your youth? Well that’s an excuse, cuz your cuts, they bruise me.” Questions of youth, potent memories and glimpses of hope escape through the cracks of the song’s words. Surrounding the lyrics is a symphony —a symphony that invites you to embrace the song, the singer and yourself. However, “The Maze,” another song about addiction and mental health, takes a different approach. “The Maze” demands that its listener have hope for their future and well-being. I love this song immensely and its lyrics, such as, “When history comes crawling back and all you wanna do is run, run/Plant both your feet and break the binding rope to fleeting demons/ Cuz you are the only hope, the final stroke of artwork/ Where you go, you’ll only if you keep moving forward.”

“To the Sky” is another one of my favorites. Saunders plays a fun, tropical sounding beat that pairs well with Heath’s bongos. In the background, Ray sings, “We belong to the sky/ We belong to the sky/ As the doves pass on by, we’ve never been so high/The moon waves goodbye and we sail through the night.” This song is my favorite to throw on and dance to, but even more, I love the imagery of this ‘trip.’ “Crash,” is another powerhouse ballad that starts off with an alluring blend of synth and guitar that reminded me of waves, which are a central theme to this clever song. And, of course, there’s “Embers and Stardust,” a song that strongly reminds me of Amy Winehouse. The cello in this song is absolutely gorgeous, and Elytra has managed to find a way for fast-paced drums to blend flawlessly with the cello. This song also has my new favorite lyric, short but sweet: “Hello, wanderer. Is your moon Aquarius?”

If you haven’t heard Elytra’s music before, you’re missing out. Not only is this album on par with some of the best-selling nationals out there, they’re also killer live. Check out Elytra’s music at elytra.bandcamp.com/releases or visit their Facebook page. I look forward to their next concert and future albums! –Alex Vermillion