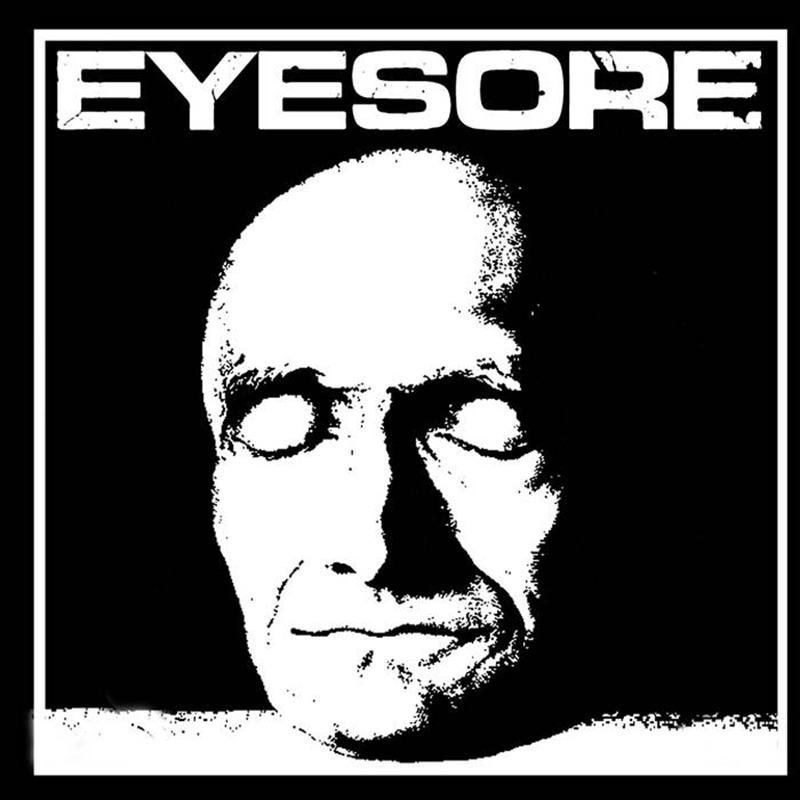 I have made a bad mistake. Fettered by the anxiety caused by the circles of social crews that ripple like their smoke rings outside of the shows of local bands—which I either know too well or not at all and which I always used to go to see either way—I never went to see EYESORE. I kept getting invited to see them and kept making poor decisions. This self-sabotaging made me miss this band when I could have been enjoying them for months. And I am making that statement only upon hearing this album. After playing the first track, “Ryan Salty,” a track that struck me for it’s carrying drums and screechy guitar parts, I was like, “Shit, oh no! Did I fuck up?” and as that song followed up with the just as good, maybe better “Wage Slave,” I was able to confirm, “Yes, I fucked up.” Then, I settled into listening to the rest.

Recorded with maximum fuzz, no song lacks snarl or jerkiness or…tunes underlying the mess of the rest that catches your ears real good. I want to forbid myself using “energy” anymore in reviews, and especially here because they’ve got all the power of the holy garage slacker anti-energy happening in that their discharge of sound is just that—a noisy discharge. It is a bubbling, brown-watered artesian well fountaining up and out. That’s where the vitality comes from. It’s a grubby and mangy vitality for sure, but it doesn’t come off as careless or unintelligible. Maybe they wanted it to and I’m being insulting by saying that, but hey, I am not a cool punk kid. Doesn’t stop me from loving these cool punks’ music. Even if I couldn’t understand a single barked lyric, it all made sense to me in a way that less noisy albums never have.

“Eyesore Hates the Police” is one of my favorite tracks, churning with indecipherable shouts and a swamp of guitar at the end, which is reached only after a length of angry, chopping rhythms with matching snarls. It’s followed by “I Never Asked for Your Support,” which, with the title in mind, sounds like the mean spite that bubbles within when someone is being condescending. It is further supplemented by some of the brattiest vocals I’ve heard in awhile. Think of what a toddler sounds like when calling something they’re being forced to eat “yucky.” It’s like that, and boy, does it convey nastiness. Looking over the lyrics (and mostly not being able to match them up as I listened along), they seem to follow a theme of frustration and anxiety concerning the complicated mess that lethargy can make of a life, like in “No Fun,” where “procrastination is so toxic, you could have had a point, but you’ve lost it.” What I have gained from this listening experience is that EYESORE get my social exhaustion, and that despite it, I should go fucking see them and so should you…and listen to their album, whatever you do. –Erin Moore