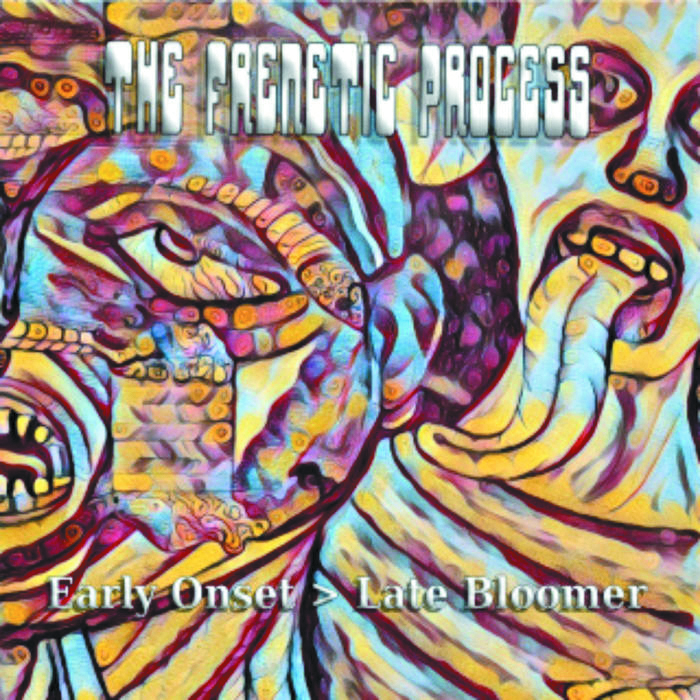 Early Onset > Late Bloomer is the latest from The Frenetic Process, a local electronic duo consisting of Matt Saari and Caleb Johnson. Together, they build gigantic walls of sound that morph into experimental dance tracks. Early Onset—on many fronts—is a behemoth of a record. Every sound is drenched in cavernous reverb then mixed to the front, and there never seems to be any fewer than a dozen things happening at once.

This trait is compounded by the fact that each track is a densely structured, multi-dimensional endeavor. Ambient intros and outros, subtle variations, and continual development mark many of the compositions. While this could make it tough to follow the music along its winding path, Saari and Johnson always provide a roadmap. “Twilight Satellite Valley” is a particularly wandering track, though the repeating samples of glitched-out singing laced throughout are one of many facets stringing the anomalous parts together.

These vocal samples, while not the star of the album, are one of its most important qualities. Though most of the sounds here are intensely digital (drum machines, MIDI, synthesizers), the inclusion of human elements adds an eerie mirror to the electronic landscape. Instead of warping these sounds into the fold, The Frenetic Process leave enough of their original nature to retain the human identity. “Harsh Noise Monthly” threatens to be one of the most confounding tracks on the record, with its rhythmically conflicting synthesizers, tittering drum machines and abundance of space. However, at the track’s midpoint, a naked singing sample appears. The sleek, unemotional chrome backdrop is sullied by the simple, sorrowful sounds of humanity.

All of these effects would be a bust if Early Onset wasn’t so delicately produced. Every sound is perfectly crisp, each rhythm precisely aligned. For an album that sounds so distraught on the surface, its creation was the labor of careful love. This is ultimately what separates The Frenetic Process from other hyper-digital groups. Instead of hiding behind layers of irony and sarcasm, as many experimental artists do, Saari and Johnson seem like they truly care and enjoy the music they make. Yes, there are bad computer puns in the track titles. Yes, the closing track is an overly saccharine ode to digital romance. But through all this, Early Onset never stops being intensely colorful, danceable and enjoyable. –Connor Lockie