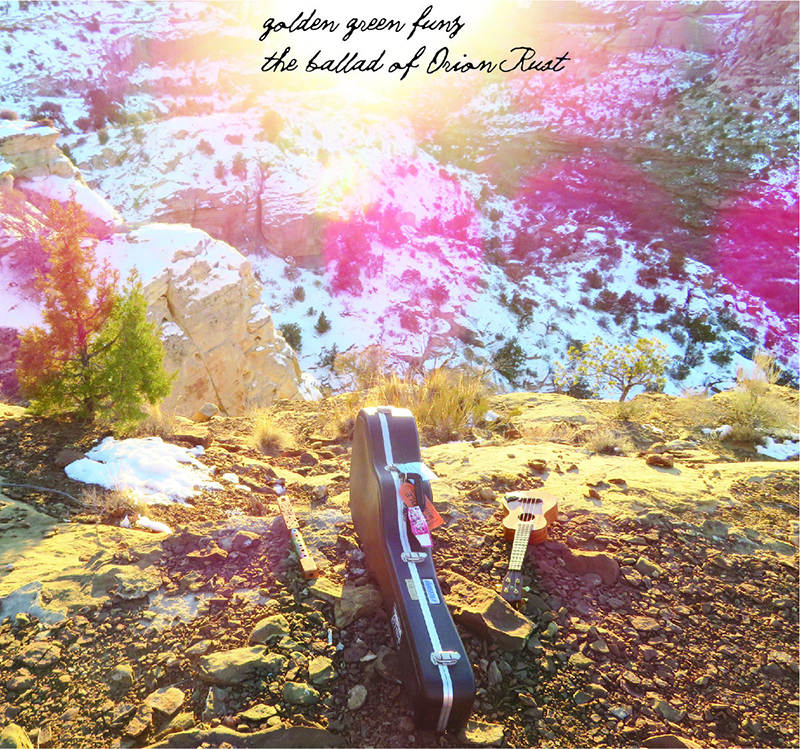 I’ve never heard an album quite like The Ballad of Orion Rust, the debut album from Golden Green Funz. It’s packed with more content, more recording styles and more raw musical energy than anything that SLUG has sent me before. Stringy, folky ballads and lighthearted singing, akin to the pipes of Jim James, create a 20-song journey that I won’t soon forget. If you’re interested in guitar/banjo-heavy songs, or a fantastic collection of acoustic serenades, look no further than The Ballad of Orion Rust.

The Ballad of Orion Rust is an unusual album for many reasons. For a start, it was inspired by and recorded amongst the rocky oddities that make up Monument Valley, the auspicious slot canyons of Escalante. The wonder and mystery of many of Utah’s great monuments permeate the album. The album memorializes the journey of its two creators—Soren Brothers and Dan Potter—as they travelled across Utah’s great outdoors. With 20 songs (over an hour of music total), The Ballad of Orion Rust is among the longest albums I’ve heard. Each song lends its own flavor to the trip, but the lightweight energy never falters, and the experience remains fresh throughout.

For the most part, Golden Green Funz stick to stringy, acoustic songs. The Ballad of Orion Rust is formed from light guitar strumming, soft singing and a unique selection of accompaniments in every song. The wispy pan flute on “Searching for the Eye,” the soft tambourine on “Spored Canyon” and the light swell of harmonica on “San Rafael Swell” are just the tip of the iceberg on this folksy journey. Melodies are probably the most important element to Golden Green Funz’ songs, and I often find myself humming lines from “Sweet Dreams” and “The Maze” as I’m drifting off to sleep. To add a bit more spice, there are clearly different recording styles going on throughout the album, with some songs coming through studio-clear, and others thick with the reverb of wherever they were recorded.

There’s far too much music on The Ballad of Orion Rust to write about in one review. My suggestion: Take a listen for yourself over at the label’s bandcamp. Once you’ve whet your appetite on the digital stream, consider picking the album up in the format it’s really meant to be enjoyed on—cassette tape! –Alex Blackburn