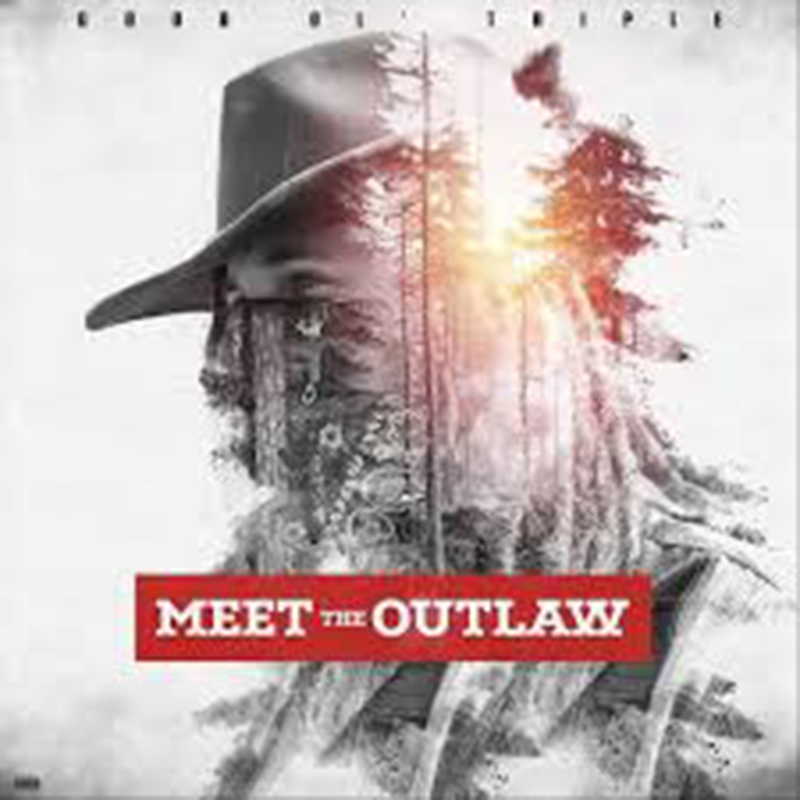 Local artist Good Ol’ Triple has released his new rap/hip-hop EP, Meet the Outlaw. It's an attention-grabbing work and is vastly different than anything this humble reviewer has ever written about before.

When listening to the album, it does not take long to hear Triple reference the fact that he is a 45 supporter and is far-right-leaning, politically. In several of his songs, he references 45 or another aspect of conservatism, which came as a shock, initially. He also promotes typically non-conservative elements of hip-hop, such as cannabis. For example, on the song “Don’t Tread on Me,” whose title already makes its statement, Triple raps, "Trump-voting, blunt-smoking / Chevy-rolling, gun-toting / Infowar, you're Alex Jonesin' / Fox News is what my fucking TV on.” Triple states his beliefs, which makes his music difficult to approach if you're not affiliated in the way he is, which perhaps is why Triple is making the music that he is. In this current political climate, shock value seems to be the norm.

“Trump sticker on my red Chevy bumping Gucci heavy, come across the levy,” Triple raps in “New Kinda Country,” reminding listeners who he is and what he believes in, which, in many ways, is a contradiction. Paradoxically, Triple is a conservative trapper, sporting dreads and pushing weight. Though he never expressly disrespects other races or hip-hop culture as a whole, one wonders if Triple is fully aware of the plight many of his hip-hop contemporaries went through, or the current, hateful policies that 45's administration has promoted or put in place. This reviewer could go on, but for the sake of objective musical analysis, let's look at the rest of the release.

Triple raps to a wide variety of beats throughout the EP, most of which are modern and are influenced by Atlanta-style trap music. Where Triple stands out, technique-wise, is that he raps with a wildly different cadence than many artists these days. He has a slight Southern accent, which reminds of Froggy Fresh, who rose to stardom with funny music videos half a decade ago. But Triple, unlike Fresh, seems to take his music more seriously.

The production quality of the EP is nothing to get excited about, but it does not distract from the content of the work. “New Kinda Country” has a catchy dynamic, a solid beat and a well-crafted hook that Triple raps. Still, the song is slightly long, and could have been a verse or two less.

In short, Meet the Outlaw has the content and the shock value that, in today’s current climate, could easily go viral. For some, this album may elicit a listen, even if it is just to listen to the strangeness of what Triple has created. –Taylor Hartman