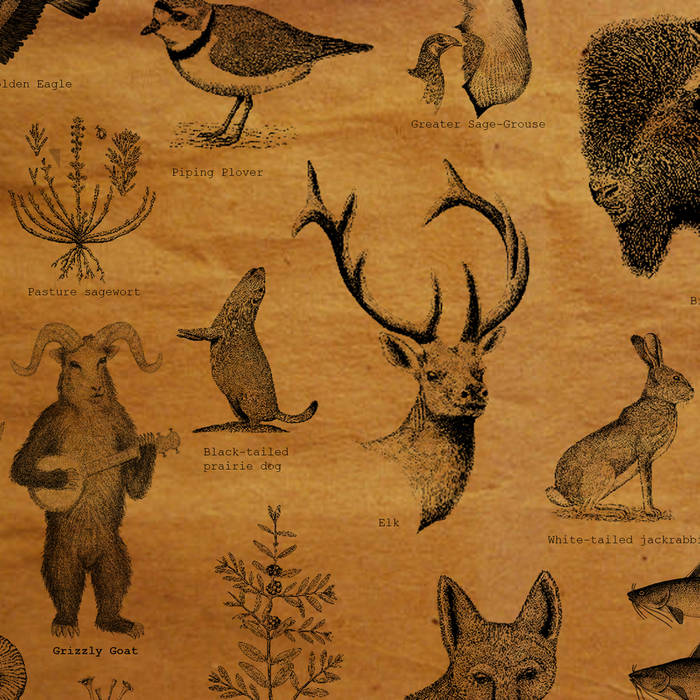 Grizzly Goat seem to have matured with Ursus Oreamnos Americanus and have captured a rawness that many folk bands dismiss. The album starts with “Read ‘Em and Weep,” which opens with a raw acoustic riff on the banjo, but pauses to add a heavier bass and a clapping sound along with the same riff and dramatic pauses. “The Front Range” feels more folk-rock, still incorporating acoustic folk elements, but with heavier drums. Rather twangy and drawn out, the lyrics are sung loudly in a folk punk–like manner, often coming through in the space between dramatic spurts of a series of hard, singular hits on the drums.

“Texas” evokes an old western scene, with quiet acoustic picking to start and a few underlying and distant electric guitar notes support stirring lyrics: “Texas in the morning / Trying to find your trails / Rushing through some dust clouds / Blowin’ ‘round the place / Some folks are sayin’ / I’ve been starin’ at the sun too long.” Less than halfway through, the drums pick up and frame the simple electric guitar, which starts and stops over a fast finger-picking as both vocals and instruments grow in volume and harmony, crying out, “I am lonely / But I’m free.” In the remaining seconds of the song, there is a heavy electric portion, devoid of distinguishable acoustics and perhaps snapping the listener out of a distant ghost town and back to modern-day reality.

Many tracks are relatively short, averaging about three minutes long. The shortest, “Sycamore, Illinois,” is quiet and only 31 seconds long. It’s a bit uncharacteristic of traditional folk songs but typical of Americana tracks, which often center an entire track on a single thought rather than on a particular instrumental set.

The album is, at the core, an upbeat, quick-rhythm fiddle fest, but Grizzly Goat slow it down with tracks like “Out Of Sight Ain’t Out Of Mind.” The track incorporates a quiet fiddling in the background, rooting the tracks in Americana and cowboy lament: “And I tell you truly / I have known the depths of lonely / Even if I weren’t the only / Person sleeping in my bed”

Whether the songs are fast, slow or somewhere in the middle, on tracks like “Oh My Road,” Grizzly Goat seem to have grasped the idea of folk and Western Americana music. Ursus Oreamnos Americanus embodies the fervent idea of cowboy: Though he may be tough and rambling, the tenderness of life and loneliness persists. –Lizz Corrigan