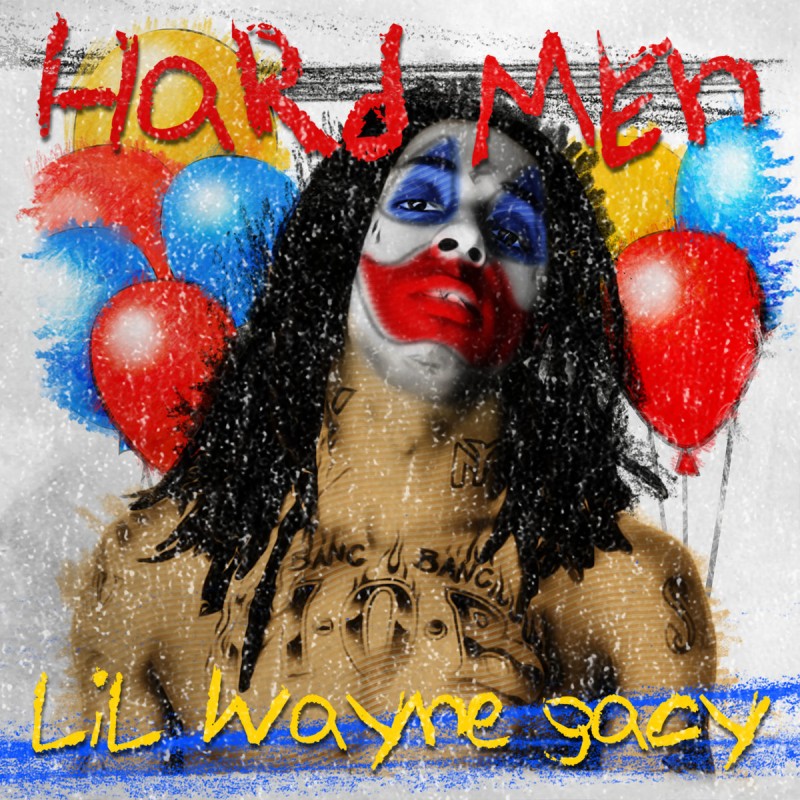 A year following the rebirth of this amazing trio, Hard Men are at it again with Lil Wayne Gacy. While they’re still a punk / metal band, Hard Men are vastly different than their previous incarnation, Yaktooth. A little quicker and with more bass-centric metal magic, this five-track alarm clock (puts your taint through the wringer.) The album and track titles are an amalgamation of pop culture and celebrity names, and they’re actually cleverer than you’d expect.

Overall, this resin-encased Necronomicon is supremely a work of mathtastic rhythm and an almost unique wave of noise enveloping each track. Imagine a crowd of anthropomorphized needles jamming their way into your ear canal or washer brimmed with hammers—it’s that kind of noise. I am particularly fond of “Whitney Spears.” The introductory guitar riff was a page out of Red Fang’s book. I don’t quite know when these brutal dudes plan on playing in the near future, but I’m going to be there front and center when they play this song, my head nestled against the P.A. system.

The vocals are husky and heavy, a hog spent in midday sun gurgling phlegm in its jowls. The bibulous vocals scrabble over alluvial bass murk in “Selma Kayak.” A dirgy smile of a song, the rhythm heaves and cramps like a Stooges album. Its teeth is flossed with rusty wire and rinsed in Ancient Age, the high-ended rhythm guitar stinging the stereocilia and shattering the malleus. The whole album swishes and clucks with wending time signatures, backed by a thick, matted fur of stupefyingly complex drumbeats. It’s no wonder that these dudes are BFFs with Baby Gurl. Their most recent work pairs well together.

I spent a couple hours driving home from Vegas, and Lil Wayne Gacy highlights the desolation and open nothingness alongside I-15. The dust-clot-coated vocals of Josh West and the cavernous slapping bass demarcated harsh sage and high desert ruin. The sun dropped low, and my head was heavy from the journey. “Barry Gusey” and the cool, desicate air kept me awake. Jackrabbits and emaciated fauna tumbled across the black road in syncopation to Whil McCutchan’s predatory sound. This wasn’t some sonically dated search for America. It was a retreat from the fumbling traipse of a wounded animal. It was a hulkus beast inching forward, sniffing at a decaying cage. Inhale this. –Alex Cragun