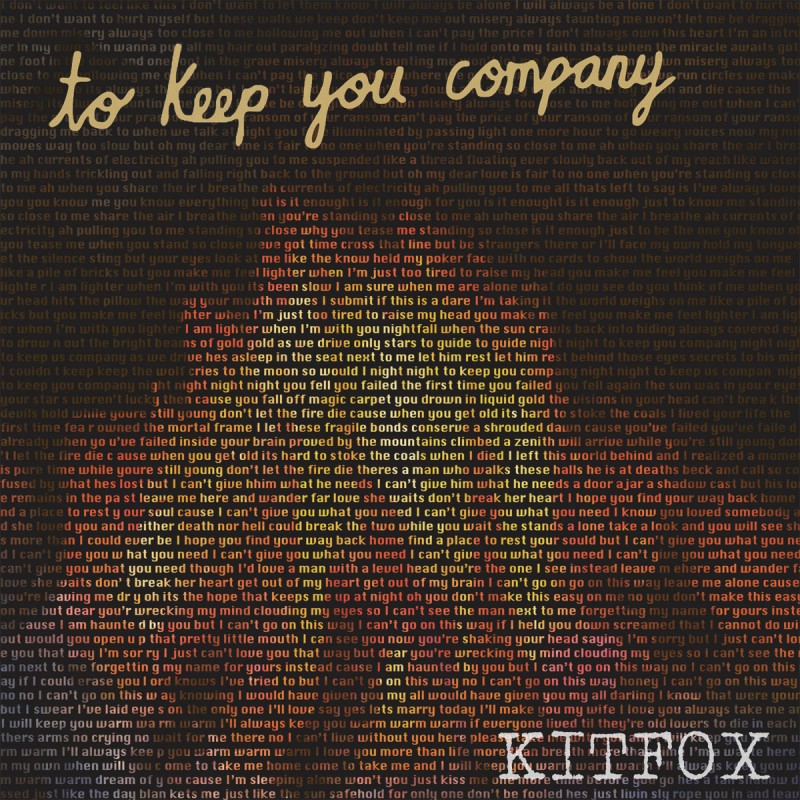 Kitfox
To Keep You Company

Kitfox are not your ordinary local band. The Provo-based foursome—vocalist Emilee Holgate, guitarist Devon Smith, bassist Conor Flynn and percussionist Nate Dukatz—redefine small-town talent with To Keep You Company, an album as saturnine as it is comforting.  Leaving their cutesy folk-pop beginnings in the dust, the band instead uses the LP to implement a hundred new sounds, thus establishing a new one all their own.

Far-reaching and impossibly destined, this full-length debut is a balanced culmination of hard work and fate. After having secured a $10,000 Kickstarter pledge, Flynn met Gabe Simon of the band Kopecky, a Kitfox favorite, who agreed to produce the album at The Study in Nashville, Tennessee. Since finishing recording, Kitfox has met national acclaim, with two of the album’s songs being featured on a pair of popular television shows. (“Always Keep You Warm” was featured on MTV’s Real World: Go Big or Go Home, while “Misery” was featured on ABC’s Blood & Oil, respectively.)

The attention is not for naught: To Keep You Company is gorgeous. Unforeseen melodies from wholesome-as-hell Holgate pair spectrally with the swelling orchestration; her voice, purer than a lingering Dolores O’Riordan, marries Smith’s consummately. Sundry influences speckle the album—a touch of First Aid Kit on the evocative “Runaway,” a trace of Coldplay on “Ivory”—as well as sundry sounds, but beneath the synths dwell abiding, traditional songs that could stand on their own were the electricity to blow out. When you listen to their ambient folk, you won’t feel alone.

To Keep You Company keeps you company like a fond, distant memory—one you would be certain actually transpired were the details not so magical. It won’t be long before Kitfox are on the national circuit, rubbing elbows with fellow Provo-bloomers like Neon Trees, blissfully reminiscing. In the meantime, they’ll always have Utah. –Cassidy McCraney