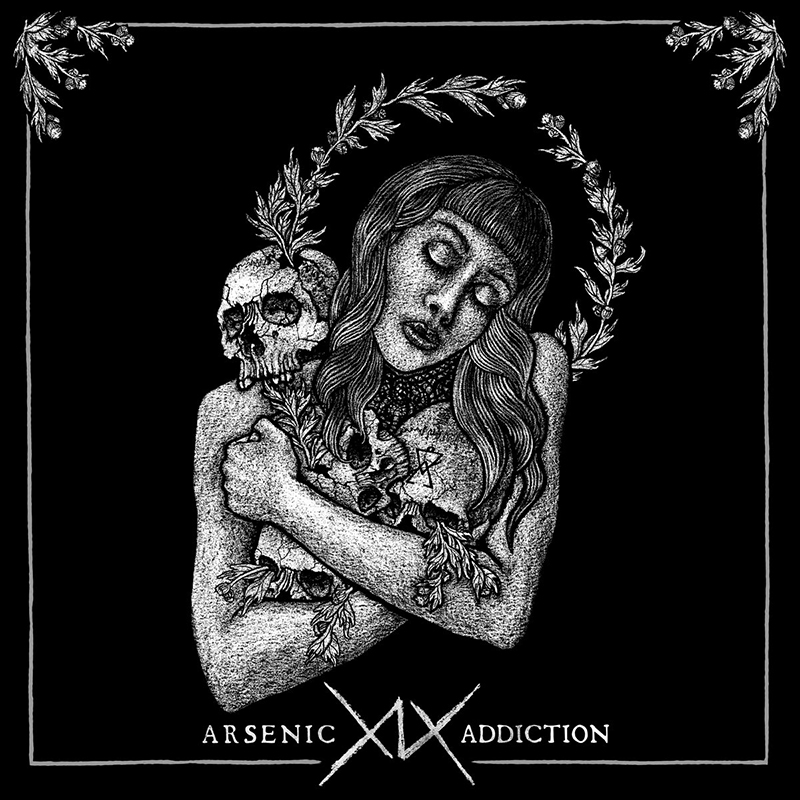 Arsenic Addiction is a gothic metal band from Salt Lake City which formed back in 2006. Their latest work, XIX, is a goth’s wonderland. It has everything goth metal is categorized by; heavy guitars, some heavier vocals and yet all sprinkled with beautiful vocals and soothing keys.

XIX starts off slow, with singer Lady Arsenic crooning in her siren-like voice. Along with her entrancing vocals, a single guitar in the background strums as she sings, “Come to me.” The first track, “As Above,” will give listeners a witchy vibe, almost as if Sarah Sanderson herself is trying to whisk you away. By the end of this track, heavy drums start to kick in, but stop before the album fades into the next song.

“Moon & Sun” is a track you can headbang to right off the bat. The heavy driving guitar and drums will satisfy any metalhead’s need. The keyboard complements the sound of these elements, creating an ethereal feel. Similar arrangements are typically found in goth metal groups. The light contrast of the keyboard adds an otherworldly effect to the rest of the music. This track is when we get the first taste of Lady Arsenic’s screamed vocals, which are reminiscent of metal group Lacuna Coil. It’s a great element to utilize, giving listeners different types of strong vocal techniques paired with equally powerful music.

This unique album features multiple fully instrumental tracks, something not often found in the genre. But just because it isn’t common doesn’t mean it’s a bad thing. These tracks give listeners a chance to focus on the elements that make metal so great. Despite what many may think, metal can be just as varied and complex as other genres.

The first instrumental track on the album is “Air,” and it’s incredibly magnetic. It’ll instantly suck the listener in with soft, acoustic strumming as more layers are added. A gloomy electric tone starts to set in as the drums follow. It’s amazing to hear how these different instruments can combine to create such a specifically gritty and gothic tone. The instrumental tracks on this album are masterful and possibly the best parts. The blending of acoustic and electric guitars with keys and drums will transport you, making you feel like you’re in a Burton-esque world.

“Spirit” is the other instrumental track on the album and it has a more upbeat feel than its predecessor. This track opens with a heavy electric rhythm and drums in full tow. However, we get another guitar in the background complementing the deep rhythm with a high-pitched tone that gives off Area 51 vibes. The keys in the background also lend themselves to the idea you may be abducted by aliens or taken over by a spirit while listening to this track. Without words Arsenic Addiction is able to take listeners on an otherworldly journey.

XIX is a fun journey from beginning to end. The only criticism I have for the album is I wish that the vocals were more prevalent. It’s amazing to have such weighted music with mystic vocals, but it’s even better when you can understand the lyrics. Most of the time it feels as if the vocal levels weren’t high enough. Part of the appeal to gothic metal is the dark lyrics. Throughout the album, it feels as if the vocals are in the background.

For instance, on the track “Summons,” Lady Arsenic can be heard chanting at the beginning, as if casting a spell or calling upon a dark friend. It’s easy to hear her voice before the instruments come in, but when they do her voice is pushed to the back, leaving listeners straining to hear the lyrics. The vocals are so powerful on this track, but hearing what is being said would make it so much more powerful, especially on a song about summoning some type of being.

Overall, this is an album worth listening to for any metal fan. Arsenic Addiction know how to serve up a dose of heavy music. –Emilee Atkinson