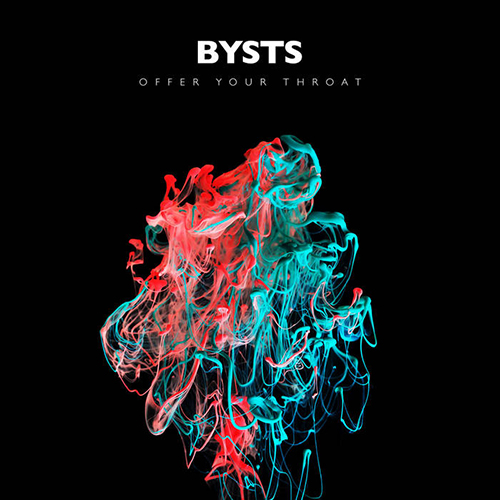 BYSTS, pronounced beasts, are a duo based in Salt Lake City; although, upon listening to the debut album, Offer Your Throat, it seems nearly impossible that a mere two humans (maybe robots) could possibly conceive BYSTS’ massive, explosive sound.

Bryan Holbrook and Stefanie Marlow are the masterminds behind this gothic, intoxicating psych album. The beast that is BYSTS is of an unquantifiable mass. The mass itself is an unstable, combustible force that expands and expels energies as frequently as it draws them in. Holbrook’s vocals fuzzily come through in each song as if he was singing through a transistor radio. Marlow’s angelic harmonies add an air of divine intervention.

Offer Your Throat is for those who are obsessed with guitar-heavy, extreme, electronic pop that can’t really be classified as one specific genre. Each song presents a new challenge. “Need” opens the album with a high-pitched clanging from the keyboard, which continues its presence throughout, even as the song rages on with colossal, reverb-soaked guitar parts. “Speed” was released as a single in late 2015. The track quiets the tempo on the album without eliminating any of the fever. It undergoes a metamorphosis that swells and shakes as the song transforms into its new skin. “Wasting Time” is undeniably synth-heavy, finding its footing in texturized drum beats. Finally, “Killer on the Road” closes out the album in cult horror film fashion—the end is not really the end of terror for the melodic group. Yet instead, it is just the beginning.

The debut LP from BYSTS is a screeching success. The duo have created something unique and diabolical. It is every bit as expansive as it is experimental. They’ve already cultivated an impressive list of bands that they have played live with, but this is no doubt just the beginning for the newcomers. Keep an eye out for their future performances and get a copy of some of their vinyl releases through The Rolling People. –Alexander Graber