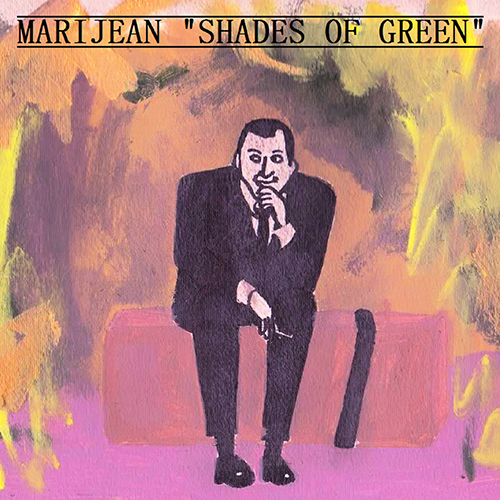 Instrumental music comes in many strokes, some illustrious and symphonic and others more rough and experimental. Marijean has created a collection of songs that fall into place on their own accord, soft-spoken with a slow burning feeling of intensity. In fact, the cover of Shades of Green is a painting of a man in a dapper suit looking bemused and perhaps unaware of the billowing, colorful fire consuming his surroundings. The sarcastic “Everything is fine” message depicts a sense of dark humor that gives the album an endearing edge. Using an impressive range of instruments and sounds, the tracks are textile, moody and meditative. Husky, willowy and everything in between, the narrative wanders at its own pace– telling a story that is as unconcerned with time and space as the man ignoring the spitting flames.

Shades of Green opens with “Waking,” a hushed, optimistic track and one of just a handful on the album that features vocals and lyricism. Though it’s hard to make out exactly what is being said, the sentiment has a bittersweet twinge and leaves you wanting for resolution. The album moves seamlessly into “Wordless Song,” a variation on the same thought. With similar musical elements as the first track, it seems to answer the question that “Waking,” posed. In “Walking Backwards,” Marijean laments, “I find this world absurd / I never understood it / But I thought I could.” In a cynical yet refreshing tone, we hear a struggle to get over romantic interests and feeling disoriented in life’s cycles.

Like any good story, Shades of Green has a beginning, middle and end. Towards the center of the album, a subtle and brief shift moves from muted to intrepid, faster electric guitar strumming and a more full-bodied composition, as in, “Bar Fly.” The title track is an intergalactic indie collision with tender lyrics and a pulsing electronic melody. Throughout the course of Shades of Green, there are moments reminiscent of Stranger Things, with haunting, repetitive electronic keyboard and a creeping feeling somewhere in between anticipation and dread (“Spooktastic.”)

As the 22-track album winds down, Marijean ties things up with “Something in the Air,” a gentle rumination with a telling final line: “The world is turning green / Is it worth saving?” –Kia McGinnis