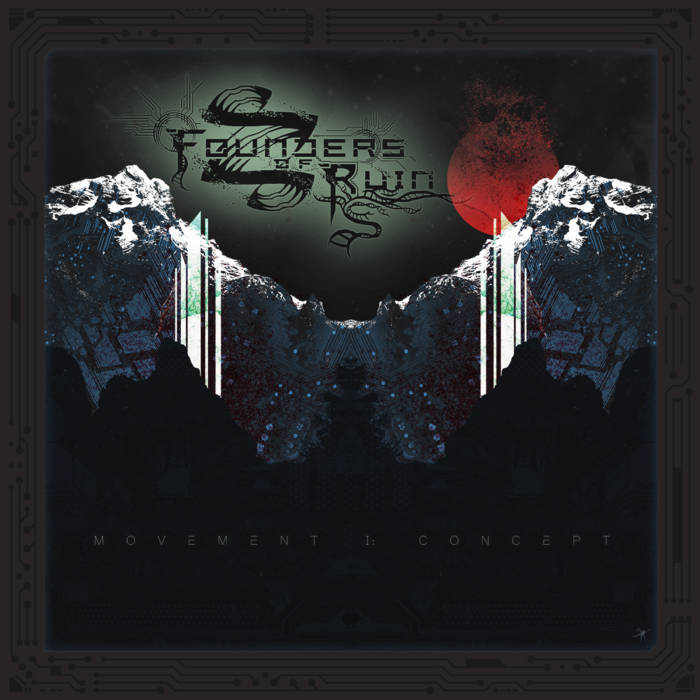 Founders of Ruin
Movement I: Concept

Records of Ruin
Street: 01.12.18
Founders of Ruin = Meshuggah + After the Burial + Between the Buried and Me

Death metal on acid! At least, that’s how fans have classified Founders of Ruin. After hurtling themselves on the music scene in 2011, they took nearly decade to create a composite orchestration of finely-crafted guitar melodies, drumming that throws its share of curveballs, and a towering atmosphere that calls back to the works of Pink Floyd. Movement I: Concept is the first thread sewn into what will continue to be a series of concept albums.

“Morning Breaks” is a heavy opener with plenty of grooves to keep my head banging and a lot of layered guitar arpeggios to emphasize their technical capacity. “Reclaim” concerns itself more with brutality than technicality though its blistering riffs and cascading melodies. “Virtue” looms at a staggering 8:47—reminiscent of old-school Killswitch Engage and As I Lay Dying. It showcases Patrick Fontana’s unpredictable drumming and includes an infectious sing-along chorus that bleeds into a crushing breakdown as the guitar shreds through the rubble. However, the song’s length works against itself—as smoldering as it is, it kept getting side-swiped by yet another riff or solo that it gets more diluted with each passing minute and by the time “Concept of the Void” plays, I’ve grown so accustomed to the tossed salad of double bass and crawling arpeggios that it doesn’t pack the same punch.

It’s not an issue with the writing and musicianship of the band, as they do have enough personality to rise above the stigmas attached to technical/prog/djent bands. However, they still fall victim to monotonous production. I try to avoid talking about the technicalities of music, as there’s no way to truly know what goes on behind the scenes of an album unless you were there (and it’s not like I could do any better). Nevertheless, metal with multiple transitions and musical breaks lends itself heavily to balance and precision to make it flow more organically and for certain elements to be more emphasized and others to be downplayed. The production is so flat on this record that it doesn’t allow much inclination for natural flow, nor ample wiggle room for much to standout.

So, I’m split on Movement I: Concept. I do enjoy the actual music when it draws me in and I love the atmosphere it’s trying to build here. But, metal is an incredibly visceral genre, so much so, that you feel like you can reach out and touch the music, and it’s so easy for that emotion to drown in a digital cesspool of overproduction (or under production). I hope that Founders of Ruin’s preceding efforts don’t fall under the same shortcomings, as their talents need to be properly presented.—Eric U. Norris