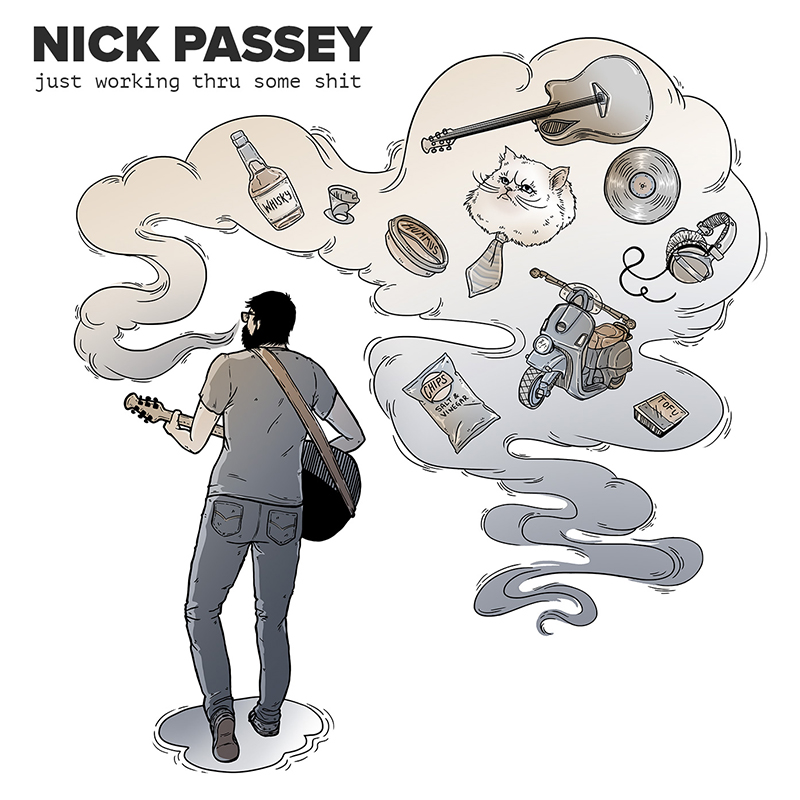 Nick Passey establishes his deep yet occasionally comical and crass EP with sparse acoustics, surprising sonic twists and vulnerable themes. The collection was inspired by the insight of his therapist that his life struggles would at least make for clever songwriting. From the first track, the album hits with a nouveau Johnny Cash cogitation with drawling Michael Stipe vocals. Title track “Just Working Through Some Shit” and its surrounding songs walk the line between thoughtful hipster folk and “my wife left me and my dog died” classic country. Passey transparently attempts to unpack the proverbial baggage rather than merely wallow in it.

The track list upholds a cerebral indie mentality yet remains firmly rooted in the country formula. Passey’s lyrics occasionally feel shoehorned and goofy, yet it’s apparently intended to be playful execution of even the heaviest of topics. “Non Believer” is a deep, existential meditation with quiet, marching snare drums in the background.

“Afterglow” and “Building Up My Tolerance” are an ode to heartbreak and love addiction supported with classic blues guitar and pleasantly staccato spoons for percussion. “Tears Me Up” is a lovely and melancholy tune with haunting echoes as if sung across a canyon during a desperate stop on a lonely road trip. Just Working Thru Some Shit is folk for Millennials, veering from acerbic wit to emotional weightiness. Passey is a skilled storyteller whose music never interrupts his narrative and cleverly accompanies it with a solid dose of heart. –Paige Zuckerman