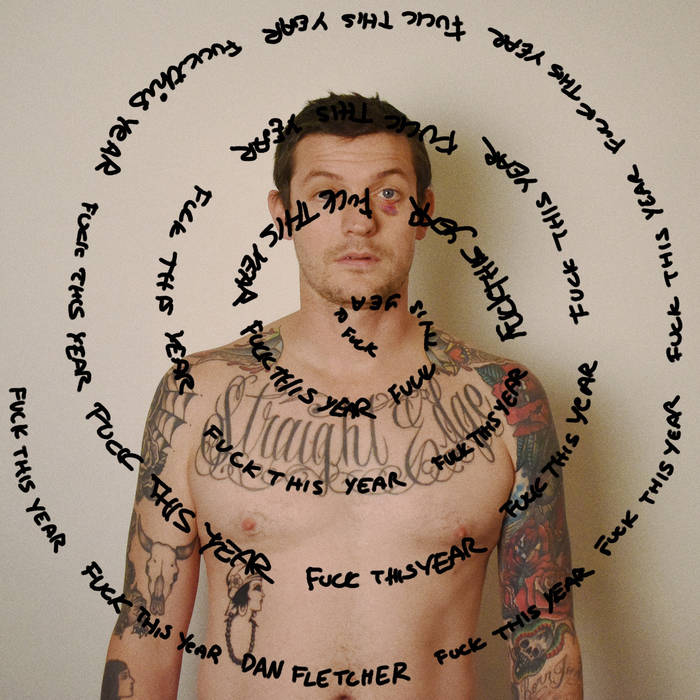 Music like this makes me think about genre a lot. F**k this Year could be considered folk, or alternative country—maybe it’s Americana, whatever the hell that is. But I don’t get the impression that Dan Fletcher cares much for genre—or at least it’s not a concern of his. Fletcher, a tattooed poet, bares himself on the cover shirtless as if to say he’s barring himself here in his music. This single seems to be a declaration of sorts in that it shows Fletcher’s wide range of influences and what he can do. The first thing that stands out to me is that Fletcher sings with angst. I’m not talking about some emo teenager pining to get laid for the first time, but the angst of a man who is asking to be heard. “13 Sleeping Pills,” starts as a jaunty tune with acoustic guitar chords crashing into a harmonica melody with a drum backbeat that all pause for a whole beat Dan to tell us that, “magniloquent’s a stupid fucking word.” I had to type “magniloquent” into google to find out what it meant and it means “high-flown language.” I loved that.

Its always good to win over a critic with the first line of the first song. Dan goes on to berate whomever his target is by calling them mother-fucking boorish and ending with wishing it was possible to choke on syllables. This short tune clocks at 1:26 and shifts dynamically by changing tempo at about the 42-second mark, which takes the listener from folk-stomping romper to a swaying lullaby. It reminds me of the frenzy you feel when your faced with someone or something that drives you crazy, and as you process things, then slow down, and whatever truth you come to is made clear.

Beginning with some lone-languishing, bending guitar notes, the second half of F**k This Year, “How I Became the Devil, Abridged” is a more straightforward tune that feels self-reflective about the product of what we become when we face the hardships of life. I’m struck by how textured this song is going from just vocals and acoustic guitar, and then into full band without any sense of unbalance. At one point in this song our protagonist meets face to face with the devil, and the dark lord’s response is, “God damnit, it’s you / Me and God been bettin’ on who’d have to suffer you’re inane bitchin’ / Take these keys I’m goin’ fishin’.”

I’m truly excited to see an artist who seems to exercise the same demons through these alt-country offerings as some angry punk or hardcore kid would by screaming into a microphone. This is wonderful songwriting and truly thoughtful production. Mr. Dan Fletcher needs to do everything in his power to get more material in the world. –James Orme