Concrete Law gets your head bobbing and is unmistakably Western, particularly in the interludes. 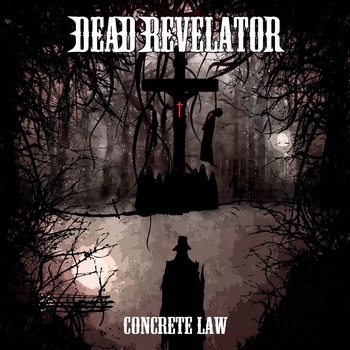 Dead Revelator
Concrete Law
Self-Released
Street: 02.20
Dead Revelator = Prong + Hell Promise + Lamb of God
A fortunate effect of the current era of Internet music consumption is that musical knowledge and reference points are exponentially larger than those of even 15 years ago. This works to the advantage of Salt Lake’s Dead Revelator’s because, even though they play a unique amalgam of styles, the musical knowledge base of today makes their music promptly accessible and identifiable. Their brand is a combo of groove metal interspersed with elements of thrash, hardcore and what can only be described as western flavor. Concrete Law gets your head bobbing and is unmistakably Western, particularly in the interludes. Although this probably won’t appeal to the kvltest of the kvltest, that hardly matters as these guys sound more like they’d take driving around pickup trucks and hitting up some barbecue over communing with Norse gods any day. Cowboy hats and flying Vs, that’s what Dead Revelator is all about. – Peter Fryer