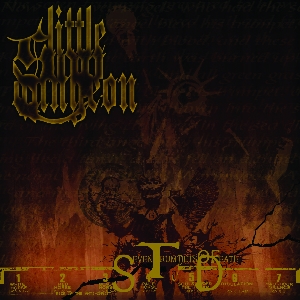 Little Sap Dungeon
Seven Trumpets of Death
Dungeon
Street: 10.01
Little Sap Dungeon = (Skinny Puppy  x  Coil) + Ministry
Six years since their previous album, Kevin Cazier (Perception Cleanse Perception) and Christopher Alvarado (Twilight Transmissions, Roses and Exile, Harsh Reality) are back with seven (no, eight! There’s a hidden one!) tracks, marrying their dismal dystopian visions to harsh yet beautiful, heavy post-punk industrial noise. Layered with the expected samples—inspiring activists, crazy neo-fascists, conspiracy buffs, an iPhone alarm and so on—there’s nothing surprising here, but that doesn’t mean it’s boring. With visions of apocalypse and the seemingly inevitable decay of our society, each song rings with a new doom. The songs, with their weighty themes, don’t seem intended for the dance floor, but some (“With an Iron Fist” and the stand-out track, “Meet Your Maker”) could find a home there. Others like “The Fade” and “Eradication of Dreams” drone with palpable dread. If not the most original album, this extremely limited-edition CD (only 100 were made) nevertheless is a strong contender, well worth a listen for rivetheads and a must-have for fans.