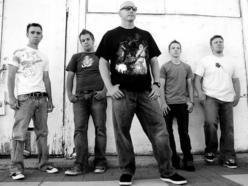 Citizen Fate
Cranked To Overkill
Self-Released
Street: 01.10
Citizen Fate = drunken karaoke – the alcohol and the fun
Local CDs are always a mixed bag.  95 percent of the time they suck, and once in a while they 100 percent suck.  Unfortunately for my ears, Citizen Fate fell immediately into the latter category.  It is always impressive when someone pays money to produce their own music—that is ‘indie’ in the purest sense of the word after all—but that doesn’t mean it makes for good or palatable listening.  Lead by the dull monotone vocals of guitarist Tom Berry, the band can’t quite decide who or what it wants to be.  There are no less than 35 musical “influences” listed on their MySpace page and Facebook page, where they have already announced the cancelation of their “final show” (!) and maybe that’s not such a bad thing. The rest of the band sound like a group of high school friends getting together to play backup at an imaginary karaoke bar, but without bothering to rehearse.  The songs—credited to the whole band—are generically bad, especially “War Boomerang,” “Phoenix Rising” and “In The Sun.”  There is a slight, welcomed reprieve in “Nothing To Say” and in reading the liner notes I discovered why: someone else sings it. The worst of the lot is the dreadful “Rhonda,” a stab at humor that fails both musically and especially lyrically.  One wonders if it was due to hearing a Citizen Fate tune that made poor Rhonda vomit in the narrator’s car on their way to the big prom?  Probably, as I felt the same listening to it.