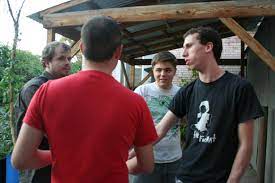 I immediately gravitated towards this album when I first played it. It had all the hallmarks of the music I liked in the late 90s: melodic “punk” with a bit of piss ‘n vinegar. I’ve changed and so has music and the demands I put on what makes an album truly great. All the bands I really admired from that pop-punk era, Strung Out, Propagandhiand Good Riddance ended up putting out more solid and adult themed albums while some groups that I really loved, like AFI, fell into an abyss of poppy shit. So this may hit somebody’s sweet spot in their teens, but older fans may want something more meaty (not directed at you, Russ Rankin).