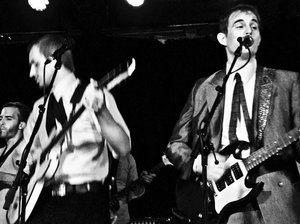 The Rubes
Self-Titled
Self-Released
Street: 2.8.08
The Rubes = The Dukes of Hazzard + Chuck Berry + Folk Music of the United States
Greg Midgley is one of SLC’s geniucians (genius + musician), which sounds a lot like “magician.” Not a coincidence. Boy can play piano, climb pillars and strut with more heat than a mating tomcat. And now he can croon. The Rubes’ new album takes a more mellow turn than previous eras, heating up with the urgent rock of track 3 (sorry, no titles on the copy I got). In track 4, Greg Bowie-ballads it with the sweeping melancholia of a musical, then plays a slow folk burner with arpeggio guitar-picking and singing tone molded into a sort of nasally Tom Waits vocalcake. 1950s garage peppers track 6. The unifying thread is gentle, alt-country folksy twang infused with Greg’s thoughtful lyrics.