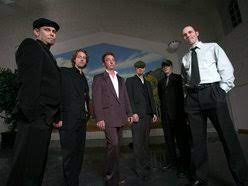 Local Reviews: Two and a Half White Guys

Two and a Half White Guys

Two and a Half White Guys = The Slackers + New York Ska-Jazz Ensemble + Stretch Armstrong
Given the average lifespan of most local bands, and especially local ska bands, it’s amazing that Two and Half White Guys are still around. What’s even more amazing is that they’re still really, really good. On the Gringos’ new album, they use their signature blend of ska and jazz as a base and jump around the musical spectrum a bit. From the strictly traditional ska of “Jodie” to the hard rockin’ “Stompin’” and the bossa nova-esque “A Thing of the Past,” Two and a Half White Guys aptly adapt their ska style to a number of genres without sacrificing any integrity. On top of all of this, ska legend Victor Rice mixed the new album and contributed one of the album’s best tracks in “A Moody Dub,” reworking the ska-meets-blues style of “A Moody Blues” found earlier on the album. Gringo isn’t just a great local album—it’s one of the best ska albums released this year.