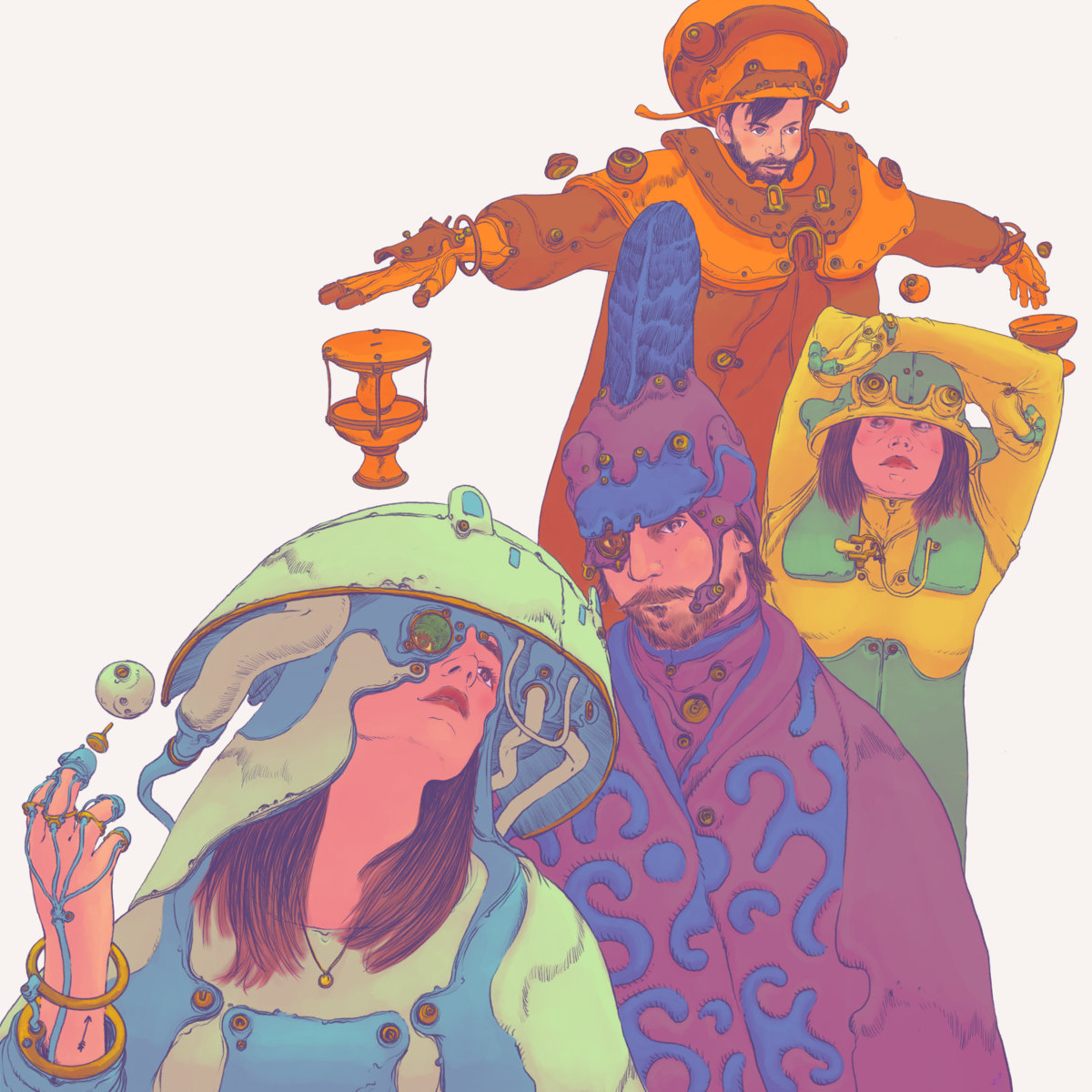 Gannet, the second full-length from freak rockers Muzzle Tung, takes the norms and status quos of pop songwriting and melts them into gooey, free-flowing psychedelia. Evolving from the previous duo of Geoff Leonard and Michael Biggs into a quartet with Leonard, Karly Parker, Dyana Durfee and Seth Pulver (though the lineup has *again* changed since Gannet’s recording), Muzzle Tung harness the full body and breadth of their new, full-band sound. If the group’s debut, Administration, felt like two musical pranksters one-upping each other with stacked bits of electro-pop bizarreness, Gannet thrives on a sonic collectivism. The quartet (and a handful of guest musicians) sound defiantly at home within these strange songs, navigating their folding corners and protruding edges with the deft ease of a court jester.

Gannet’s instrumentals run at full blast across its runtime, using the force of each musicians’ input to construct towers of crunchy, rainbow-tinted sound. From the motorik space grooves that open “The Tale of Strapping Bo” to the distorted guitar chorale that closes “Something More,” Muzzle Tung cram each second with all manner of  guitar wonkery and spellbinding synthesizer excursions. Durfee’s gurgling bass tones and Pulver’s steady drumming undergird this effect-laden chaos, blending the web of sound into a single, hulking mass that’s soaked in reverb and fighting against the upper limit of a distortion wall. Add to this maximalism the litany of group unison vocal lines, call-and-response choruses and occasional saxophone outbursts from Dave Payne, and the omnipresent on-ness of Gannet shines like the midnight sun.

But the true power of Gannet comes from its songwriting and arranging, a hairbrained take on composition that characterizes Muzzle Tung as a band of hermetic tinkerers making the closest thing to proper pop as they can without losing their exploratory edge. For the most part, the melodies of these songs plod along with an unconventional gait: one syllable at a time, one utterance per beat. “I’ll take more of that please / I see op-por-tu-ni-ty,” goes the opening line of “Dagger of Returning,” placing pregnant pauses in between the syllables of “opportunity” as if Leonard needs to catch his breath between each utterance. This segmented delivery appears prominently on “Cerveza Springs” and “The Suns a Bad Boy,” as well, the tunes verging close to a new form of monastic chanting with their simplistic melodic movements and stone-faced group presentations.

And the unstable nature of these vocal lines point to one of Gannet’s greatest strengths: Even if Muzzle Tung sound linguistically in sync with each other, this subconscious communication arrives via their own language, an unquestioned nurturing each other’s eccentricities. The chorus melody on “The Sun’s a Bad Boy” walks on mismatched stilts, landing on unnatural emphasis and carrying words and sentences across musical phrases, while “Heroin” paints the deadly drug as a sort of Scooby-Doo monster that’s gonna “getcha” through a rapid spoken-word ramble that stumbles over bar lines and smashes into the chorus. “Tarry by the River” features the most mesmerizing vocal lines on Gannet, with Leonard and Parker’s doubled vocal arpeggios rising and falling like sin arcs across eye-popping chord changes.

Against these overarching qualities of individuality, a few points on Gannet reach (if accidentally) for something a littler sweeter; spare moments where Muzzle Tung seem to chance upon tried-and-true pop brilliance. The band centers “VF Blue” around a staccato piano vamp, building a touching ballad about the struggle for self-worth out of Gannet’s sparsest texture. “I’m a fool for even trying / And I’m a fool / Hoping that you even care,” sings Leonard on the chorus, the lament of his unhurried vocal delivery carried by Durfee’s slinking doubling of the melody in the bass. “Lost in the Passion” ekes closest to unabashed beauty, its stomping post-punk groove laying the foundation for Parker’s ethereal vocals and the most transportive synthesizer explosions on the record. If it cuts down on the smirking oddity a bit, the lift of “Lost in the Passion” goes furthest in actually propelling Muzzle Tung toward the cosmic carnival presented on the album’s stunning cover.

Though it often trades in convention for unpredictability, Gannet is far from an exercise in bad taste or myopic expression. Instead, the songs here use their quirks as the platform for a joyous caravan that finds meter in arrhythmia and speaks in its own tongue. More than anything, Muzzle Tung thrive on working out their own rules measure by measure and constructing big, beautiful new shapes out of unlikely supports. –Audrey Lockie