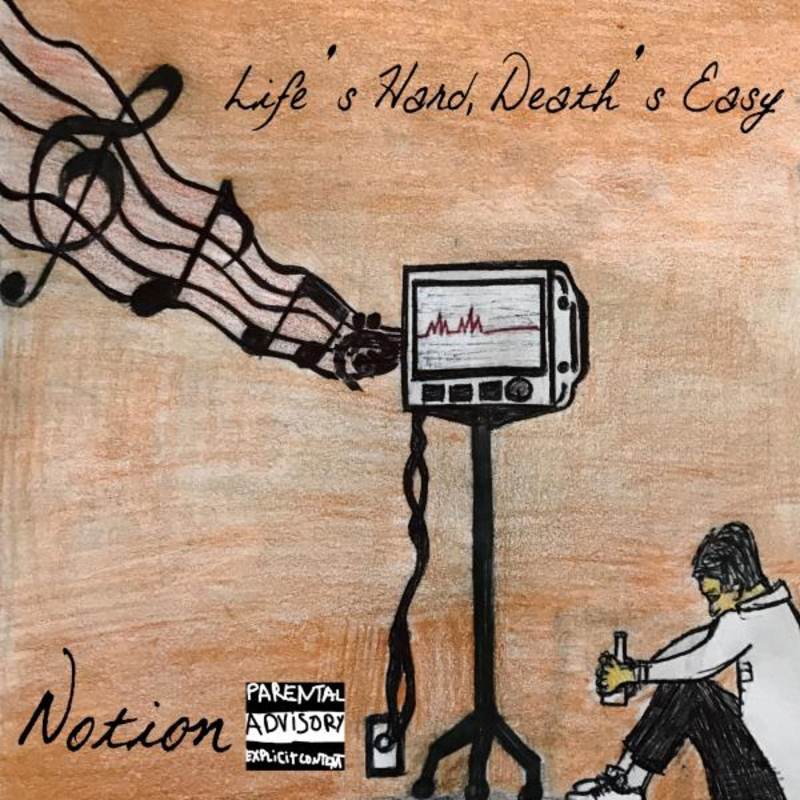 Salt Lake City based rapper, Notion is back with his second studio album, Life’s Hard, Death’s Easy, with dreams of moving to New York City to pursue his music career. Throughout the album—which is an introspective journey into the emcee’s life and thoughts—Notion comments on his upbringing and the city he lives in, often critically, and expresses a desire to get out and “spread his wings,”—finding a place with more opportunity.

In “Summers,” Notion complains about being judged in Salt Lake City and how he may be more accepted in a different place. “The city I live in is no place for rapping, especially when all these gangster trappers get off about my race,” Notion raps. He also complains about being “cursed” by living in Salt Lake. Notion deals with the idea of how one finds where they belong frequently throughout the album, giving the work as a whole an underlying throughline, making it cohesive and concise with the feeling of a larger work of art rather than smaller pieces mashed together. The features in Life’s Hard, Death’s Easy are some of the strongest parts of the album. Av Music has a catchy, hyphy verse in “Old Days,” and Lily Mason provides beautiful, well-crafted melodies and vocalizations in “Legendary.” Each feature also acts as a break in Notion’s flow and lyricism, which oftentimes becomes repetitive and long-winded.

In “Summers,” Notion raps, “The words are so much more than just a verse or rhymes,” which rings true during most of Life’s Hard, Death’s Easy. Notion carves out his own meter and flow throughout the songs of the album, and often seems to be a step or two in front of or behind the beat. Whether this was purposeful or not it is unclear, but the result of Notion’s over-complicated flows makes it hard to understand him, and when he is rapping off-beat, it makes it hard to get into a song and enjoy it.

That being said, Notion has a lot going for him lyrically and is obviously working hard to develop his craft. Notion is introspective and real, commenting on the world as he sees it and appears unafraid to say what he thinks is going on when facing perceived injustices with courage and pride. Stay tuned for more releases from Notion as he continues to grow and progress as an artist. –Taylor Hartman