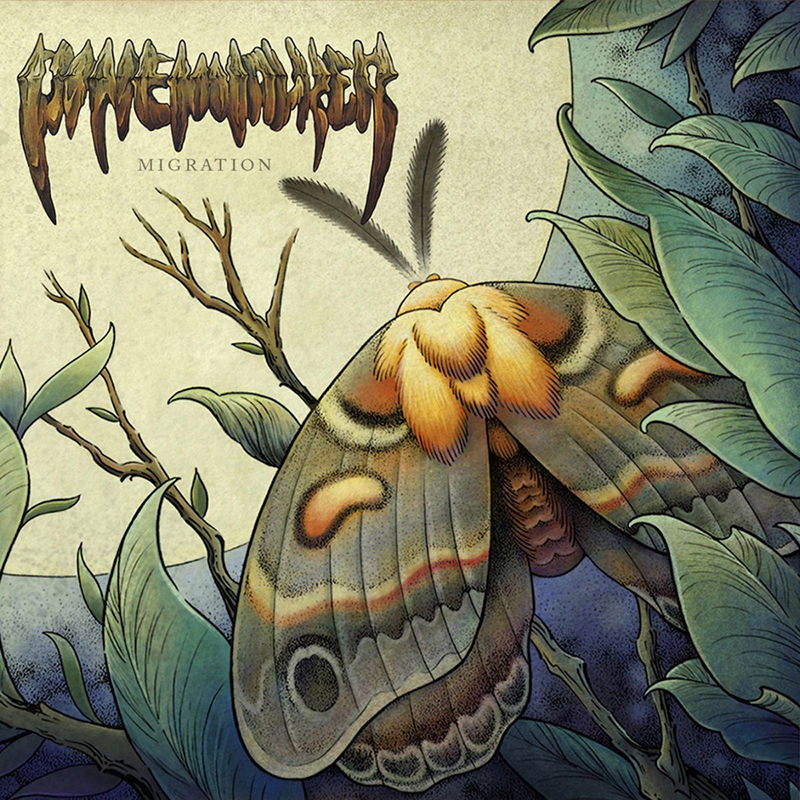 Salt Lake City’s newest guitar army, Pinewalker, drops their debut album, Migration, at the end of summer. At a moment when an increasing number of metal acts are exploring minimalist lineups of three or even two members, Pinewalker boldly strikes out into maximalist territory. Featuring three drop-tuned and ruthlessly cranked guitars, Migration offers not only a decidedly dense mix but also an unexpected variety of musical styles.

Taking their name from a perambulating tree creature familiar to fans of role-playing games, Pinewalker aims to fill the 45 minutes of its album with as many dark and creepy moods as have thus far been discovered in the known universe. The album opens with strings evocative of Sepultura’s Roots, but soon enough shifts into the huge, scary chords that are the solid stuff of doom metal. The band’s broad sonic explorations are aided by the interplay of the trio of rowdy guitars. This allows for either heavy riffs chugging under speedy solos played up at the 22nd fret, layered moody arpeggios or harmonized leads evocative of rock pioneers Thin Lizzy and Iron Maiden.

The album’s most obvious feature, its diversity of musical styles and guitar tones, will most likely polarize listeners. Many an educated ear will enjoy identifying sundry musical influences, or even guessing at the various amps employed in the studio. Others, however, may deem the album too much of a hybrid. Indeed, the multiplicity of juxtaposed tempos, time signatures, guitar tones and playing styles transports Migration almost to the threshold of prog.

While leading doom bands have produced epic tracks that occupy an entire side of vinyl, the structure of these legendary songs tends to be quite simple, slowly and persistently exploring every possible permutation of a single musical theme. Migration, on the other hand, shifts with scant transitions between multiple riffs, styles and sounds. Musical references bounce from tribal to highlander to pirate to hillbilly—sometimes within a single song.

The album no doubt often gets down and genuinely rocks, though as a whole, it nevertheless feels less cast than welded together. In listening to the various compositions on Migration, one senses dry-erase markers and a white board hanging in the background. This same factitious quality registers in the many contrasting vocal styles, which hopscotch from angry barks and growls to demonic taunting to soaring and seemingly soulful baritone. Add to this assortment the occasional bravura of “Whiskey in the Jar” guitar melodies, and one is left unsure whether the final conglomerate is meant to be heard without irony. By striving to be all things metal at once, Migration risks sounding like nothing specific. A Pinewalker enthusiast would be hard-pressed to describe to a potential convert the band’s essential sound.

One hopes this project will lead to further developments in the life of Pinewalker. Thus far, we see an emergent entity only beginning to stretch its lanky limbs. We will remain alert to Pinewalker’s progress. –Brian Kubarycz

Local Review: Erebus – On the Shores of Acheron
Electric Wizard: Weird Tales from the Wizard in Black