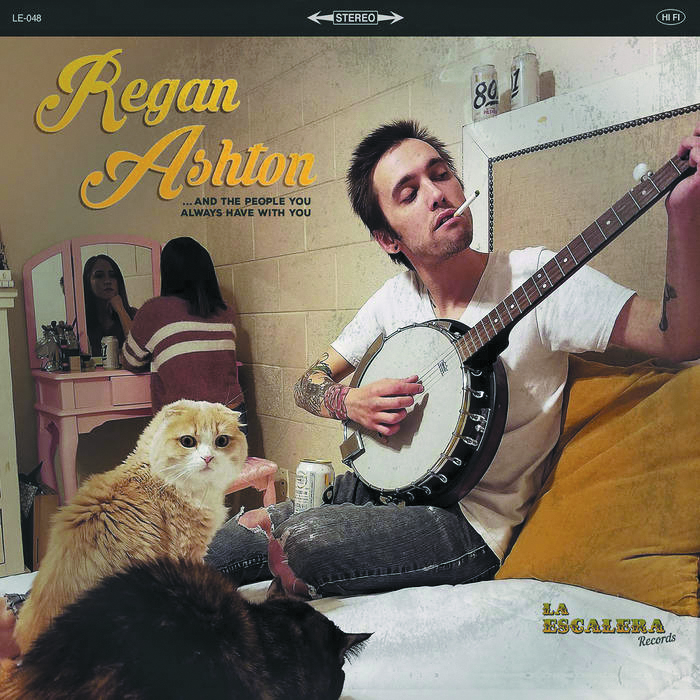 Local Review: Regan Ashton – … And the People You Always Have With You

Regan Ashton
…And the People You Always Have With You

Ever since I came into this scene, Problem Daughter have always been the band that sonically stood out to me the most in the Salt Lake punk rock salad bowl, due in part to Regan Ashton’s unmistakable, raspy and melodic drawl. As I’ve come to get to know Ashton over the years, I’ve learned that he is someone who has been in some dark places emotionally and mentally. He’s managed to create amazing songs out of it, whether it’s with Problem Daughter, his acoustic solo material or his veering into the realm of country.

Worlds definitely collide as Ashton’s love of punk, folk and country all shine equally on this record. Tracks like “Scumbag” and “Junkyard Parakeet” are folk songs that have a banjo, piano and harmonica with added country twang. Both are covers from local folk artist Erin Tooke, aka TK Vanderbilt. If you don’t know who he is, do yourself a favor and look him up. For the last decade, he’s penned some of the best folk/punk hybrid songs in SLC. “Anywhere But Here” gives off a hoedown vibe, with its upbeat and dance-inducing rhythms reminiscent of Jerry Reed. “Failed Author” takes more of a downturn in tempo, with the harmonica and bottleneck guitar driving home the traditional country-ballad approach.

Ashton informed me that the tracks he sent in were not the master recordings, but I assured him that if they sound the least bit rugged, it will just enhance the integrity mirrored in old-school country as well as punk rock. It’s amazing how many similarities there are in these two genres: The songs deal with personal stories driven by emotion, they can have a political edge in most cases, most purists agree that a lot of the veracity was lost when the genre garnered mainstream accolades, and most will agree that the best advocates for both genres are those who are considered “outlaws.” As his debut solo album, Ashton has done an impressive job making a record that accentuates his abilities as a standalone musician while not forgetting his roots. –Eric U. Norris