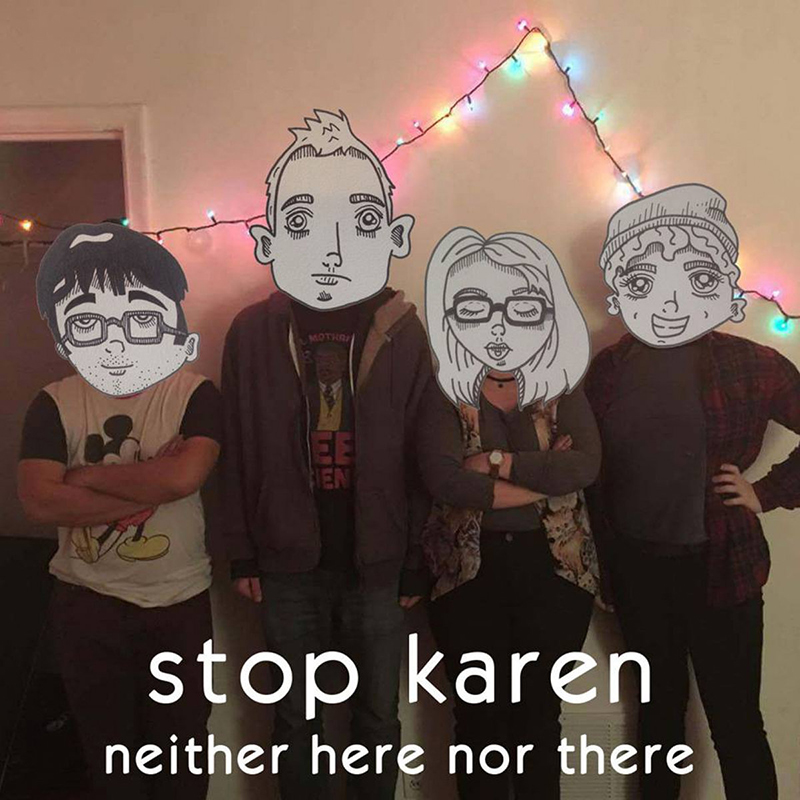 Stop Karen | neither here nor there

Local Review: Stop Karen – neither here nor there

Stop Karen
neither here nor there

Stop Karen’s neither here nor there is a succinct, six-track album that is cheerful and heartening, though not lacking in depth nor lyrical prowess. Upbeat ukulele is the musical focal point, woven into clear vocals that create a folk-grunge-pop feeling that lies somewhere in between twang, punk and ballad. neither here nor there is a genre-busting debut with a charming narrative.

Ukulele can easily cross into cheesy Jason Mraz territory, but Stop Karen use the instrument cleverly, allowing it to carry their tracks with an easy-breezy rhythm that leaves plenty of opportunity for harmonic sing-along/clap-along/whistle-along moments. Though there are five members in the band, it feels as though the tracks span a wider range of instrumentals, imprinting a sprawling musical effect. There’s a straightforward, witty, Courtney Barnett–esque approach to Stop Karen’s lyricism. In “Elephant,” a track that has an appropriate circus feel, Stop Karen sings, “She’d be happy in the closet if it weren’t for the skeletons.e

Opening track “good in white” explores existence, marriage and mortality under the guise of a “la, la, la” campfire song lilt. Stop Karen sing, “Hush little baby, don’t you cry / Nothing really happens when you die.” Though pointedly morbid, the lullaby ultimately ends on a bittersweet, shrugging note, adding, “You wouldn’t want to go to heaven anyway.” Perhaps there is a touch of ex-Mormon apathy bleeding through, or perhaps Stop Karen are working through the inevitable mortality crisis that comes with experiencing a death firsthand.

“here’s to the sluts,” the closing track, ends raucously with a heavier drum beat and faster pace. It’s a smirking anthem disowning proper, “ladylike” gender roles and encouraging such frowned-upon behavior as shaking your moneymaker.  It makes for a triumphant end to a well-rounded local release. –Kia McGinnis