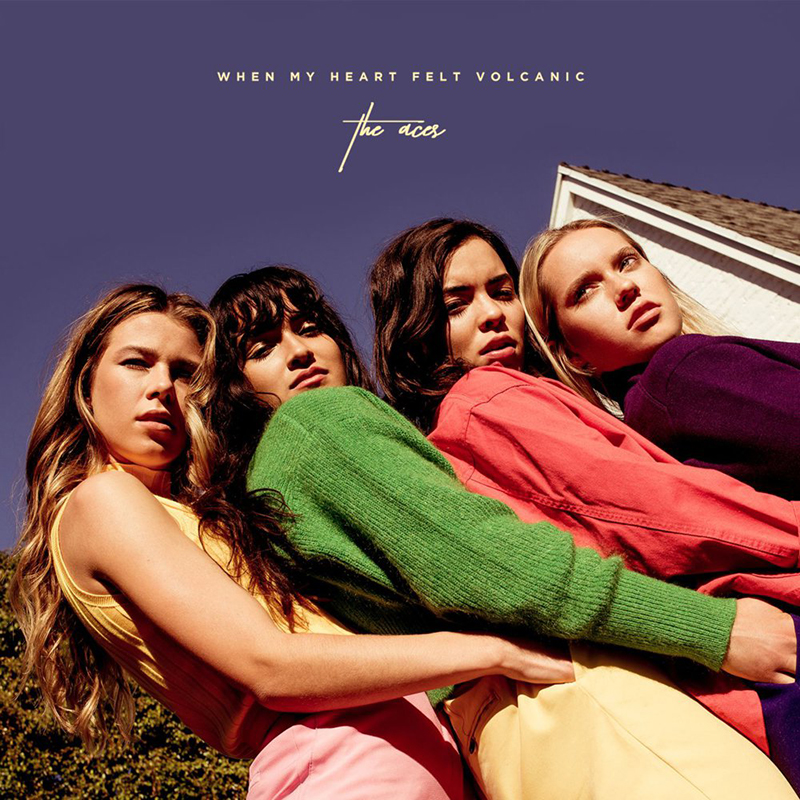 The Aces | When My Heat Felt Volcanic | Red Bull Records

Local Review: The Aces – When My Heart Felt Volcanic

The Aces
When My Heart Felt Volcanic

Provo alt-pop quartet The Aces are Utah’s badass sweethearts, having achieved national success for their sparkling, smart guitar and synth-driven tunes. The Aces rose to the larger stage in 2017 with the release of their first EP, I Don’t Like Being Honest. After the attention of several national indie publications and NPR, as well as successful tour stops, The Aces established themselves as artists on the rise. Our ears are graced with their 13-track debut album, When My Heart Felt Volcanic, heaping with pretty and slightly edgy new tracks and including the album version of their EP hit “Stuck.” The album opens with the aptly titled “Volcanic Love,” a cleanly produced track with beautiful indie vocals and ringing guitar riffs. “Just Like That” is a smoldering, melodic “F-you“ with yummy synths and programmed drums. Massively ’80s sounds bombard in “Strong Enough,” evoking Pat Benatar and angular shoulder pads stuffed in loudly colored blazers … in the best kind of way.

As an unabashed fan of electronically hefty pop, I was pleased all the way through this album with its nostalgic influences. “Bad Love” even brings some funk into the mix, displaying The Aces’ ability to play the board. The album closes with “Hurricane,” a soft, sad piano ballad and “Waiting For You,” a smooth, sexy and ultra-cool track that proved to be my favorite of the entire album. The Aces offer acerbic, confrontational lyrics that serve as an interesting pairing with their semi-bubbly sounds. The combination crafts an appealing glimpse into rebellion against the pressures to be sweet, smiling and palatable. Perhaps “girl power” is too outdated a term for these women, yet their sound is full of feminine empowerment nonetheless. As with many successful smart-pop acts of the day, it’s sometimes a bit difficult to discern when and where The Aces are a band and when they are vocalists set to über-produced electronic formulas. Answering the demand for traditional rock-format bands to blend into the pop scenery may be a smart move for the sake of market success, and it appears The Aces are balancing that carefully without losing their identity. They seem to be squarely on the forefront of the current femme-force of indie pop music, a sound and personality not likely to fall from favor any time soon. When My Heart Felt Volcanic is a solid entrance on the global scene, and a local offering worthy of your favorite playlists. –Paige Zuckerman