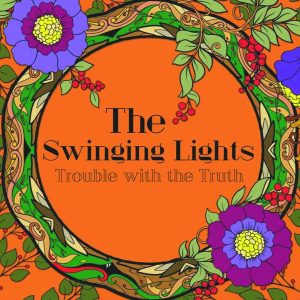 The Swinging Lights | Trouble With the Truth | Self-Released

Local Review: The Swinging Lights – Trouble With the Truth

The Swinging Lights
Trouble With the Truth

When it comes to genres like alternative country and Americana, we can sometimes get artists who are seemingly dry and ultimately noncommittal to any traditional roots genre. As a devotee of roots music, I’ve noticed that  so much of what gets assigned these designations becomes forgettable. However, there are the rare exceptions that bring so much to the table that they can’t help but make an indelible impression. The Swinging Lights are an amalgam of many genres, but as they transition from one musical style to the next—like folk to gospel—in the same song, it’s clear that this is done with purpose. Even though each track on their most recent record, Trouble With the Truth has characteristics that make them unique, everything comfortably fits under a singular umbrella of artistic vision.

In the bio on their website, The Swinging Lights claim that they are at their best around a campfire. With all deference to the band, this record—with all its wanderlust and majestic notions—strikes me more as road-trip material. It’s eclectic in the best way. It grabs my attention enough to get lost in it, without feeling demanding. “Heaven is Having a Laugh” is a country track that makes me want to feel open air on my face. It has a loose feeling like the rest of the record, in the same way The Rolling Stones records in the ’70s were loose. This feeling is something that I imagine is hard to capture intentionally, as it can only be the result of a group of musicians who trust each other and enjoy the process of making a record together.

Another stand-out element is how noticeable and upfront the bass is in the mix. Roots music rarely features bass like this. It makes the whole record more versatile and lends it a weight that’s usually lacking in similar records. There’s something specifically Utah-centric about this band. Their influences are diverse, but as distinct and dissimilar as those influences are, none of them ever seem to take a backseat. It’s as if Bob Dylan and The Shins were thought of as equals and no trivial pedestal placement had ever been conceived of. “I want to roll you up and smoke you out / I want to hold your hand and shut your mouth,” are the opening lines from the song, “A Better Way to Die.” It’s a jangly tune that grasps at truth as if there could be no other answer. So often these days, a record can feel disposable like everything else, so perhaps the best thing I can say about this band and this record is that it sticks with you. I’ll be listening to this one for a while. –James Orme