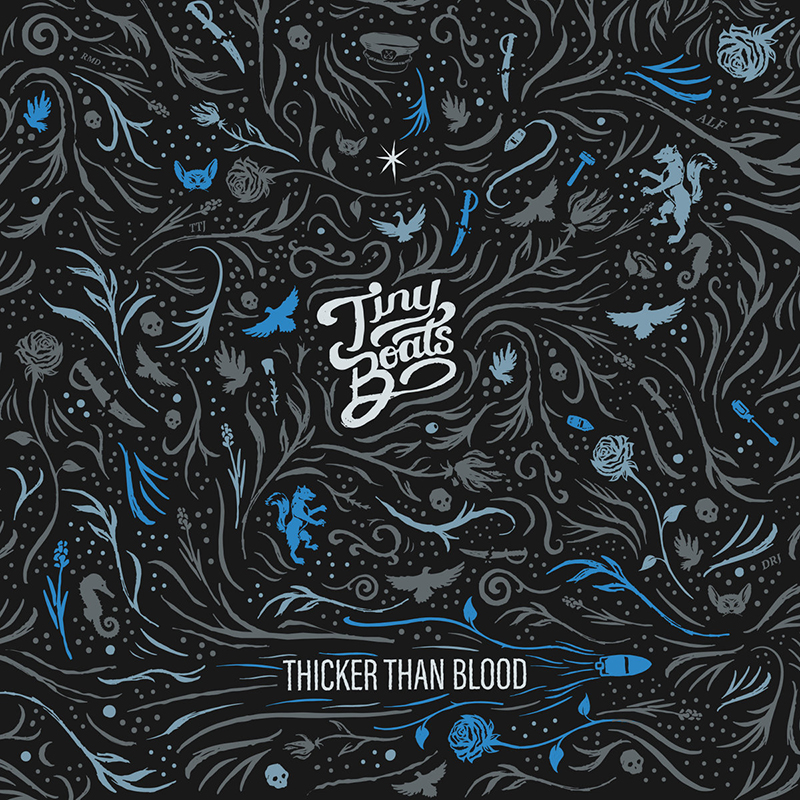 For the past five years, the two-piece folk rock outfit Tiny Boats have become a bit of an underground success in SLC. Their 2014 debut, The Broken Vessels, proved that the band had some sonic grit beyond just a guy singing over an acoustic guitar with the occasional drumbeat. Their sophomore effort, Thicker Than Blood, definitely continues that trend of flying through the different soundscapes of the music spectrum. While Tiny Boats’ sound is rooted in folk, dripping with the essence of Fat Wreck Chords artists going acoustic, it also throws in country, punk, indie, pop and classic rock, allowing each song to carve out its own niche.

The soul of this group rests on the voice and words of Jesse Crowley, whose lyrics range from introspection and personal plights to his views on the current sociopolitical landscape in which we all live. Meanwhile, Jason Jones provides arrangements with organs, synth pads, piano and drums to add some real meat to the sound. However, it doesn’t just jump in that way—“The Knot in Your Stomach” starts off pretty subdued, with Crowley crooning over his guitar while the backing music swells ever so gradually. The title track is much more vibrant and jumpy, showing off the group’s quirkiness. The song is riddled with lyrics like, “We played our Misfits covers / And played all kinds of shows,” and “Upstairs for frozen pizza / Then we’re heading to the show / If I forget the lyrics / I can just check the front row,” painting the portrait of a pair of seasoned musicians who’ve both lived to perform and performed to live. However, the absolute anthem of a chorus leads me to believe that this track might have worked better as the closer, yet we’re only two songs in.

“Shake (We’ve Got Ourselves a Situation)” comes seemingly out of nowhere with its electric sound charged with ominous lyrics of “Shaking the foundations of the Salt Lake Valley until there’s a continental divide.” The lyrics seem to hint toward the fact that the Wasatch Front is overdue for one hell of an earthquake, much like SLC is overdue for such a revolt that it would figuratively split the state in two. “My Old Enemy” brings the energy down a notch, but the lyrical department doesn’t bend as they delve into the inner struggle with the double-edged sword of passiveness, and how such an attitude has become the norm. “Apathy, my old enemy, / You turned the cynics into weeds / You spread like a disease / The modern plague.”

“I Don’t Know Where It Ends” bears the disposition that it was written in the back of a van in the middle of a tour. The lyrics allude to the common counterparts of existential dread that the modern DIY artist faces—working a day job in between gigs, sound guys at venues never getting the EQ correct and having to constantly shift your view on what you define as “successful.” “Freight Train” and “Before the Flowers” are both somber ballads with lyrics detailing Crowley’s feelings after losing two separate loved ones. Along with the backing of some synths, he displays his feelings and memories so earnestly in his lyrics and sings it with such soul that it makes me want to know more about whoever it was he was writing about.

The last song on Thicker Than Blood, “Bury Me,” goes hard with an outlaw-country vibe, with an organ carrying the melody behind the acoustic guitar chords while the lyrics discuss themes of figurative resurrection after having unloaded certain baggage from your life. It leaves the album on a positive note, though I still feel the title track would’ve worked as the stronger closer. This album feels as if you’re getting to know a new person—they aren’t going to be one to throw everything at you as soon as you meet them, but rather wants you to get comfortable in their state of normalcy as they gradually pull back another layer to display their uniqueness. As each song progresses on this record, we get to learn more about Crowley’s life, his political views, people he’s known and his own personal demons until we get a somewhat complete portrayal of who he is. –Eric U. Norris