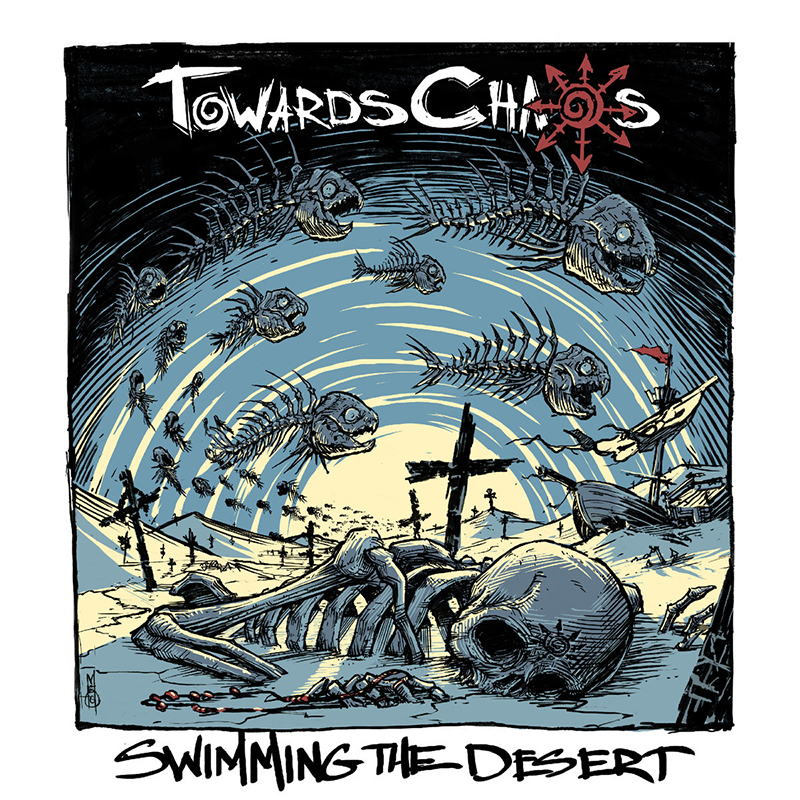 Towards Chaos
Swimming The Desert

A quick trip into Swimming The Desert from Salt Lake’s Towards Chaos will almost suffice to reveal the whole of the band’s monumental ambitions—almost.  STD is a rock n’ roll time machine, the controls of which are set for the heart of grunge. Having crossed the gateway of a murky, moody introduction, the band quickly throws the switch on its dual rectifiers and jolts their Frankenstein’s monster onto its begrimed Converse high tops. Submitted for your approval is a creature sutured from various remains of the ’90s—none of them especially anonymous—a golem modeled from the shake and resin deposits of every smoked-out quartet ever to sport a knitted hat in the heat of the noonday sun.  STD figures as an unapologetic effort to reap the danky weed of legendary bands from such humidity-afflicted Meccas as Seattle, Washington and Charlotte, and bake and refine the harvest clean in the kettle of this great western basin.

If Brigham Young did indeed command his faithful to make Deseret green with hemp weed, sounds such as those produced by Towards Chaos might well have been the side effect. But to unearth their roots, STD’s crunchy djenty chords come straight from the annals of Pepper Keenan and Jerry Cantrell.  The ‘tudey phlegmy vocals are textbook Lane Staley. The pounding grooves are all but lifted from albums of a skunkier time. To the band’s credit, this is a facsimile fair enough to pass for the genuine article. If stitched from remnants, STD is no hack job, but the work of a rock n’ roll Carlyle—an electric, opiate Sartor Resartus.

The most interesting aspect of STD is not its close proximity to the vegetable from whence it fell, but rather the extent to which it manages, at times, to roll in unforeseen directions. For instance, it’s hard to listen to STD without hearing, with great delight, hints of Aerosmith’s Stephen Tyler blooming up through the dust. While this allusion might be entirely unintentional, the decision to cover The Police’s “Wrapped Around Your Finger” was deliberate and brilliant. In Towards Chaos’ grip, Sting’s lyrics are freed from their literary pretensions and allowed to lash out as simply pissed off. The effect is unexpectedly immediate and powerful. Here, Towards Chaos are at their very best, revisiting the known past and modifying it to make it feel fresh and jagged-edged again. –Brian Kubarycz