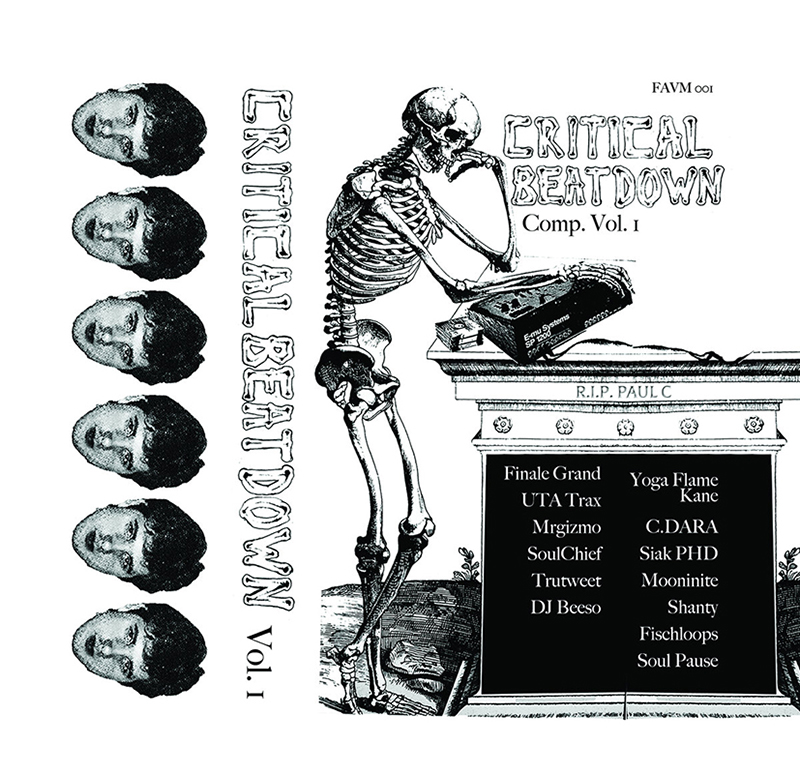 For the inaugural release on his new Fountain avm label, Adam Terry (aka Finale Grand) culls 13 new tracks from artists who performed during the first year of his Critical Beatdown series at Good Grammar in downtown Salt Lake City. Each previously unreleased track has its own distinct character, showcasing the diversity and quality of Salt Lake City’s dance music scene.

However, since there’s nothing tying these tracks together beyond the artists’ areas of residence (and the internet has all but done away with the connection between geographic and stylistic restrictions), Critical Beatdown is a bit of a sonic clusterfuck. The tracks are as far reaching as Finale Grand’s lo-fi, warped takes on jazz and Mrgizmo’s future-focused dub production, spanning from SIAK PHD’s revivalist techno to Fischloops’ absurd, sample-based compositions.

While every track conflicts with others in unique ways, there’s an overarching tension between the past and the future. Half the tracks look solely ahead, toward what dance music could and should be. The other half seems intent on nostalgically looking back on the “golden-age” of early house and techno, doing their best to offer exact replications. Critical Beatdown asks what the purpose of dance music production is, placing conflicting answers to this question right next to each other on the track list and ultimately voting for both as viable directions.

While the inclusion of nearly every type of dance music prevents Critical Beatdown from achieving true unity, it also prevents it from ever being boring. The unpredictable album sequencing brings about a litany of surprise switches, with each new track offering a new take on beat production. What also helps with the overall enjoyment of the album is that there’s not a dud the whole album. When the mood is more smooth (as it is with Mooninite and Soul Pause), it’s the perfect mood music. However, when this album hits hard, it reaches tangible levels of heaviness. C.DARA’s “Scraperoom” is probably one of the strangest tracks on the whole compilation, but there’s no denying the infectious nature of the stuttering keyboard riffs and the gigantic sub-bass.

Far from cohesive and from an exhaustive survey of local electronic music, Critical Beatdown nonetheless serves as a solid showcase of the always growing community of DJs and producers. Check out Critical Beatdown on the first Thursday of every month at Good Grammar. –Connor Lockie