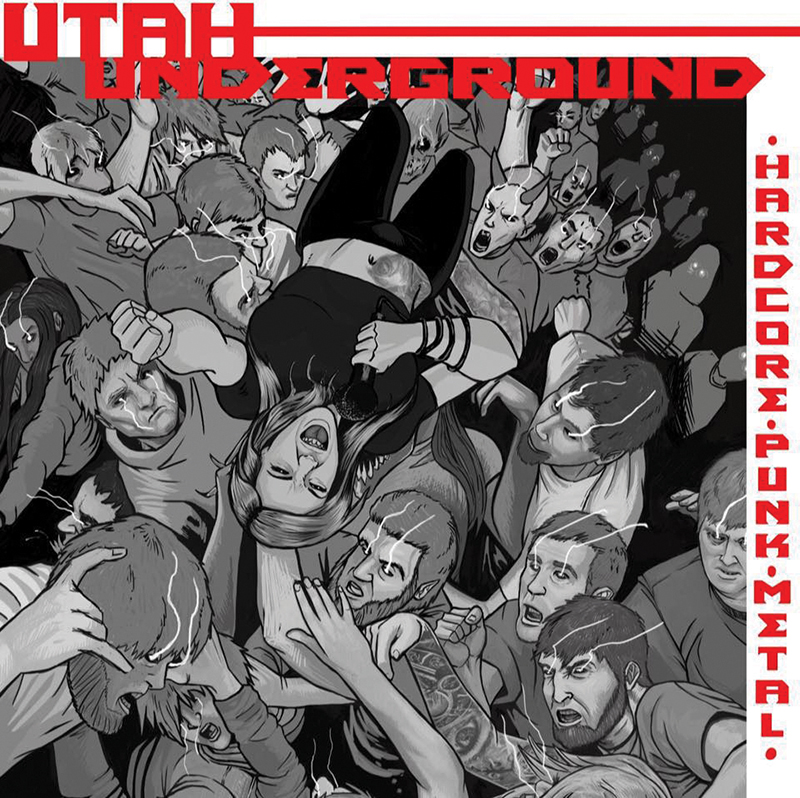 Salt Lake City is a bowl—a valley isolated on all sides by its towering mountains, briny depths of the Great Salt Lake and miles of flat desert adjunct to the bipolar weather conditions of scorching heat and bitter winters. This valley was an oasis for the pioneers, much like how the underground community acts similarly to those who face its natural, political and social repression. Art is reflective of its environment, and with the intricacies and incongruences that make SLC, its underground artists are its bi-product bearing the same ferocity as a group of bees thrown into a sealed container, shaken violently and unleashed with their stingers drawn. Twenty-three bands, 23 songs—the Utah Underground Compilation is an assorted collection of Utah’s greatest advocates of music that is so heavy, gravity has forced it to exist in the underground—some of whom are more established and others that have been around for mere months.

Kicking off this compilation is Despite Despair with their newest track “Ruthless Criticism” boasting their signature balance of chaotic dissonance and chant-along choruses that deviate into a bulldozer breakdown, serving as a prelude for what’s to come. Seven Daggers picks up with “Legendary,” offsetting the brutality with its jazzy groove and Anthony Davis’ primal yells. Then we get “Grade” by The Wake of an Arsonist, which slows things down to a crawl with atonal breaks between chugging riffs reminiscent of ’90s hardcore being played through the murky veil of sludge. Establish keeps those dissonant chugs going in “Time’s Up” while vocalist Zaina Abujebarah growls with ferocity, “An apology is easy to cough up!” Villain delivers an incredibly heartfelt tribute to longtime SLHC advocate, Scott “Skerv” Arave (RIP) in the appropriately titled “Skerv”—a whirlwind of riffs that sift from alternating picking to down-stroking in a matter of seconds.

Hemwick ripping through with the instrumental “Bloodmoon” showing off their dynamic use of progressive elements separating their spacey-guitar sounds from their more noisy segments. Then there’s a shift into straight-up metal territory with Swine of Dissent sporting a power metal exterior on “With Serpent Tongue.” One of the newer bands on this comp, Population Control, gets their time in with “Lucas”—two-and-a-half minutes of pummeling beatdown. Hero Double Zero have always had songs with deep lyrics pointing out the flaws in humanity but are introduced with the most hilarious song titles and they do so here with “Infested By Llamas.” Mandalore is really good at getting out what is needed in just over a minute: “…And Then There Were Some” doesn’t pack any extra weight—it’s one-half fast rhythms while the other half is a breakdown with the rallying chants, “Enough is enough!” and “I won’t beg!”

After that we get taste of ’90s skate punk from “Inception” by LSDO and the menacing melodic death metal of Bhujanga’s “Erebos” to shake up the flow. PXR (or Positive X Reinforcement) pull out some of their heaviest chugs in “Blood In Blood Out”—it definitely feels like a fighting song, but that crawling breakdown at the end just sends it into straight-up brawling territory. Delivered from hardcore’s murky quarries, “Cowards” from Communionist is perfectly filled with muddy down-strokes as the lyrics “I won’t fall silent” are hurled off of Rich Evans’ grinding vocal chords. EXES is one of the most well-rounded groups on this comp—“Fire & Fury” (from their EP of the same name) is adorned in black metal chord progressions, blast beats that melt into D-beat rhythm and a mix of growls and screeches having it transcend genres.

This compilation encapsulates this city’s most provocative, angriest and downright brutal surrogates from the spectrum of punk rock, metal and hardcore. The only downside is that there aren’t more of them on this CD, so it’s up to YOU to do some digging on what Utah Underground is all about! –Eric U. Norris