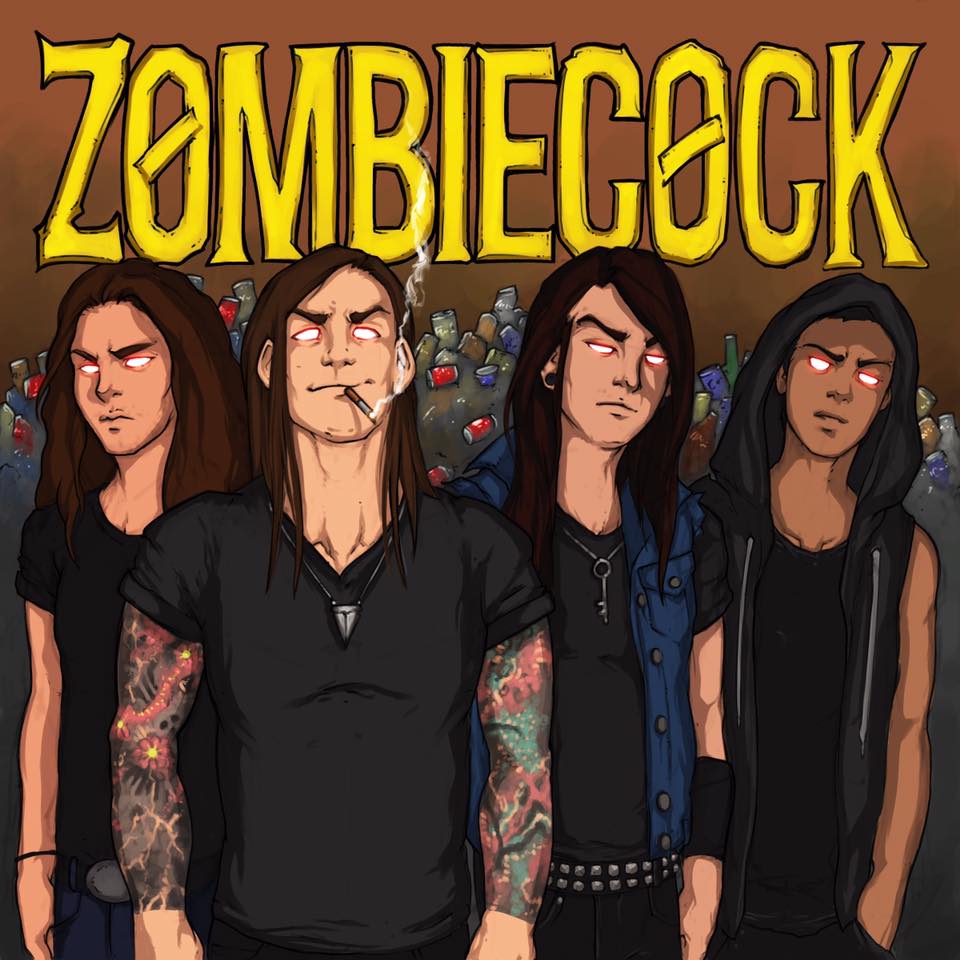 Harmonizing vocals, speedball guitar riffs and agile drumming; lyrics of graveyards, ghosts and the living dead; and all things under the full moon of a dark and dreary, George Romero–esque night translated into a full frontal assault of 3-chord progressions—it must be Zombiecock!

These guys are among the frontrunners of modern horror punk in SLC. Their serene blend of vintage horror, slasher films, classic punk rock and bits of tongue-in-cheek humor in all the right places (all things that make up classic horror) has kept them in a steady incline for over four years. Since their first release in 2014, Zombies Love Punk Rock, Zombiecock have incorporated Alex Hansen’s melody-driven, punk-rock background to complement Ryan Davies’ headbanging riffs in a dual-guitar attack.

The album’s introductory track, “Undead Anthem,” starts off, fittingly, with th.e Dawn of the Dead quote, “When there is no more room in Hell, the dead will walk the earth.” Following are some eerie, blues-style guitar while Davies, Hansen and Willie “Wolfbite” Hatton-Ward repeat harmoniously, “The moon is rising,” while Nic Battad‘s drum beats steadily build up. A quick fade and a moment of silence pass before the hammering riffs of “In the Attic” jolt with such intensity that it’s difficult to turn away.

“Feel the Hate” and “Wasted” showcase more of a straight-up, punk-rock vibe with some catchy choruses: “All you do is fuckin’ hate—lie, bitch, and complain,” and “I’ve wasted your time, and I’m wasted again!” While the songs aren’t bad—hell, they’re probably the ones I remember the most lyrics to—they feel a little out of place. There are no references to monsters, zombies or other horror-related subjects, and they deal instead with more of a general hatred for people. Maybe if they had written about said topics from the perspective of a serial killer, would it have fit better, but the lyrics as they are stray a little from their horror-punk mantra.

Zombiecock goes back into the macabre with “Your Own Demons”—a mellow, mid-tempo track that really showcases the contributions from each band member. Battad plays around with the drum beats, which gives the song a tighter feel, and Davies and Hansen do not downplay their guitar capabilities with some ripping solos closing out the song. “Sharpened Teeth” drives the album home with thrash-style riffs that are in stark contrast with Wolfbite’s smooth and almost seductive voice—almost like he’s a killer leading you into a false sense of security.

Overall, the album is short, with only eight tracks, but solid. It’s a step up from their previous release in almost every way, with songs that aren’t afraid to be slow and others fast or even both, and some more lyrical variety—even if it comes out of left field at times. –Eric U. Norris